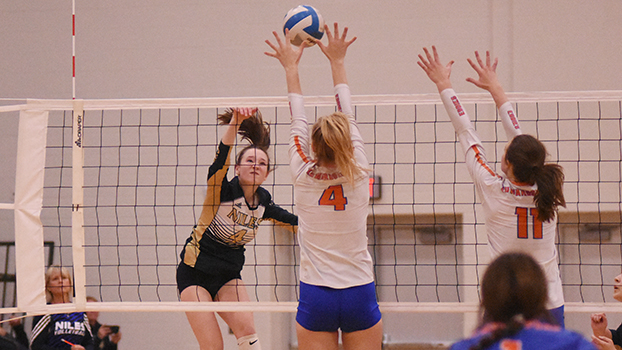 NILES — Veteran Niles coach Jenny Nate and her team will not have to work very hard to find out information about their potential opponents in this week’s Division 2 Regional being hosted by Vicksburg High School.

Three of the four teams in the regional are members of the Wolverine Conference, which Niles won with an undefeated record.

The Vikings, ranked No. 6 by Prep Dig, will face an Otsego team (ranked No. 23) in Tuesday night’s semifinal. Niles has already defeated the Bulldogs three times this season. The match is scheduled to begin at approximately 7 p.m.

In the first match, Wolverine Conference member Three Rivers will face Grand Rapids South Christian, which is an honorable mention team in the Division 2 Prep Dig ratings. That match is scheduled for 5:30 p.m.

The winners advance to the regional title match at 6 p.m. Thursday in Vicksburg.

But while getting information on the opponents may come easy, Nate and her team know that winning the school’s second regional championship will be anything but. Niles captured its first regional championship in 2017 when it defeated Hamilton 3-0 in the semifinals and Edwardsburg 3-2 in the title match.

When asked if she had talked to her team about the sports adage that it is tough to beat a team three times in one season, Nate was adamant in her response.

“We only talk and focus on winning,” she said. “Having played and knowing two of the teams (and having beaten them) actually makes it easier to prepare since we have faced these opponents in the Wolverine.”

Niles puts in hours in prepping for each of its opponents. The team and the coaching staff do not look past the next school on their schedule, and this week will be no different even if the Vikings have beaten three of the four teams in the field.

“We study film for each opponent and analyze our strengths against their defense and how we can prepare to add something to our game for each individual match the opponent won’t expect,” Nate said. “We discuss their weaknesses, their strengths (and how to stop them), how to keep them out of system, and how to aggressively score against them. Then, we get to work preparing.”

Nate has no intentions of letter her players look ahead at a potential match-up with a team it has not faced this year in the Sailors. That is a job for the coaching staff.

“Our only total focus right now is on Otsego,” she said. “I glance ahead, but give 100-percent focus on the upcoming opponent. We also do a lot of mindset work, including visualization and affirmations, along with our physical skill work. Our practices are geared toward Niles ball. Playing our game — aggressive play and capitalizing on our strengths while focusing on a one-percent improvement individually and team-based every single day. I try and make sure we always have fun mixed in with the work. They have to have fun and love what they are doing while we prepare.”

How committed is Nate to not looking ahead?

“I will answer the question about what it will take to beat the teams on Thursday after we take care of business on Tuesday,” she said. “We use the same approach before each match. Based on our 2017 run, I learned that Niles is formidable, and we can beat any opponent if we play like a team, do the work, prepare, have balanced scoring, embrace roles and do our jobs, put up a tough block and bring our energy.”

The regional champion will play in the Division 2 Quarterfinals hosted by Grand Rapids South Christian on Nov. 16. It will play the winner of the Muskegon Orchard View Regional. That regional consists of No. 1-ranked Grand Rapids Christian, No. 11-ranked Whitehall, Newago and No. 5-ranked Hudsonville Unity Christian.

Tickets for the regional are available at GoFan.co.