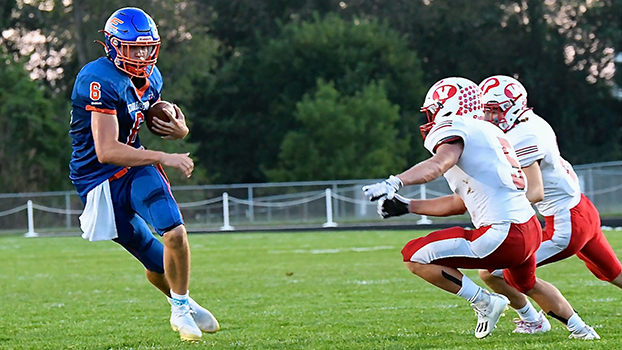 Jacob Pegura and the Edwardsburg Eddies will host Paw Paw in the opening round of the Division 4 state tournament Friday night. (Leader photo/KELLY SWEENEY)

EDWARDSBURG — Three area football teams are set to begin their quest for a state championship.

Edwardsburg in Division 4, Brandywine in Division 7 and Cassopolis in Division 8 all begin kickoff the postseason Friday night. The Eddies and Rangers will host the pre-district round of the Michigan High School Athletic Association football playoffs, while the Bobcats hit the road.

The Eddies (9-0) are seeking their eighth consecutive opening round victory when they host Wolverine Conference foe Paw Paw at Leo Hoffman Field.

The last time Edwardsburg did not win its first-round game was in 2013, when Dowagiac upset the Eddies 21-17 after losing to Edwardsburg in the regular season 36-0. The Eddies followed up that loss with a trip to the Division 4 semifinals in 2014.

Edwardsburg is coming off another upset in 2020. The Eddies were 9-0 heading into the Division 4 state semifinals when Cadillac came to Leo Hoffman Field and edged Edwardsburg 28-26.

This season, the Eddies have rolled through their regular season schedule with a perfect record, having outscored their opponents 495-42, which includes five shutouts.

In the first meeting, Edwardsburg rolled to a 57-14 win over the Red Wolves. The win over Paw Paw (5-4) stretched the Eddies’ winning streak against the Red Wolves to 12 games.

Because of the familiarity of the two teams, there are very few secrets, especially with Wolverine Conference schools.

“We kind of have been putting our wrinkles in throughout the year,” said Edwardsburg Coach Kevin Bartz. “We tried focusing on different things each week. With the way we share film in the Wolverine, we have access to everybody’s film from every game, so we don’t have anything new to put in. Everything we do is already out there.”

Edwardsburg will be counting on its ball-control offense to keep the Red Wolves off the field, and its defense, one of the best in the state, to shut them down when they do get on the field.

Jacob Walker led the rushing attack with 486 yards on 35 carries (13.9 yards per carry) and eight touchdowns. Quarterback Jacob Pegura was the second-leading rusher with 439 yards on 33 totes (13.3 per carry) and seven touchdowns. In total, seven Edwardsburg players rushed for 276 yards or more. Nine players scored at least three touchdowns.

Pegura was also 14-of-20 through the air for 358 yards with three touchdowns and just one interception. His favorite target was Landon Mikel, who finished the regular season with seven receptions for 154 yards. Walker caught four passes for 123 yards and a touchdown.

Bartz said that being able to throw the ball gives the team an added dimension.

“It gives us options right now,” Bartz said. “Pegura has done a nice job of putting the ball in the air. Our offensive line and our backs are going a good job giving him some time. It keeps teams from putting 10 or 11 in the box and coming down hard on us. It makes them take that pause in the back a little bit and get that deep release on them.”

An additional weapon for the Eddies this season has been the leg of kicker Trevor Houseworth. Houseworth is 56-of-61 on extra-point kicks and has three field goals. It has allowed the Eddies to choose between 2-point and 1-point conversions.

“Right now, the way Houseworth has been kicking, we just let him take the majority of them right now,” Bartz said. “Obviously, we are a team that is used to going for that two fairly often, so if we need that situation, we are pretty confident in lining up and doing that.”

Paw Paw enters the contest having lost back-to-back games to Vicksburg and Plainwell.

Kickoff Friday is scheduled for 7:30 p.m. 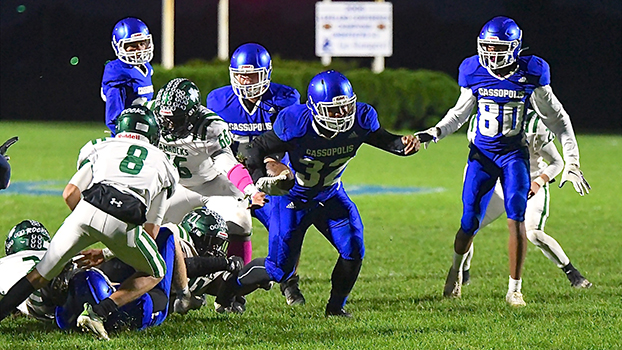 Jeremiah Williams and Cassopolis will host Saugatuck in a rematch of the 2017 regional title game. (Leader photo/KELLY SWEENEY)

Friday night’s game is a rematch of the 2017 Division 7 Regional championship game, which the Trailblazers won 7-6 at William F. Scott Field.

Cassopolis entered the contest 10-1 after defeating Reading 31-16 for the district championship.

Saugatuck went on to reach the Division 7 state championship game, where it lost to Pewamo-Westphalia 21-0.

The Trailblazers enter Friday night’s game with a 5-4 record. Saugatuck won three of its final four games in the regular season to qualify for the playoffs.

Cassopolis lost three of its final four games this season. The lone victory was a forfeit against Lakeview, which the Trailblazers defeated 45-7 in Week 2.

The Rangers and Saugatuck have one common opponent in Brandywine. The Bobcats defeated Cassopolis 30-24, while the Trailblazers defeated the Bobcats 42-20 a week later.

Jeremiah Williams led the Rangers offensively with 298 yards rushing on 68 carries and three touchdowns. Daishean Jamison added 221 on the ground on 52 carries with two touchdowns. He also caught six passes for 64 yards and a score. Jamison was limited the final few games of the regular season by an injury.

Reggie Hart, who suffered an injury in the regular-season finale against Berrien Springs, added 203 yards on 46 carries and a score. Quarterback Collin Bogue was 46-of-102 for 701 yards and six touchdowns through the air. He also ran for 128 yards and two touchdowns.

Second-year Ranger Coach Steve Green said the defense and the Rangers’ offensive line will be the key to the game Friday night.

“Trying to stop their ground attack,” he said about the challenge that Saugatuck presents. “They are very aggressive up front, and their defense rallies to the ball.”

If Hart cannot play Friday night, it will also be a big loss for Cassopolis on defense, where he was the team’s leading tackler with 65 stops. R.J. Drews, who also suffered an injury against the Shamrocks, finished the regular season with 62 tackles. He also had four interceptions. Alex Dahlgren and Brayden Westrate added 58 and 56 tackles, respectively. 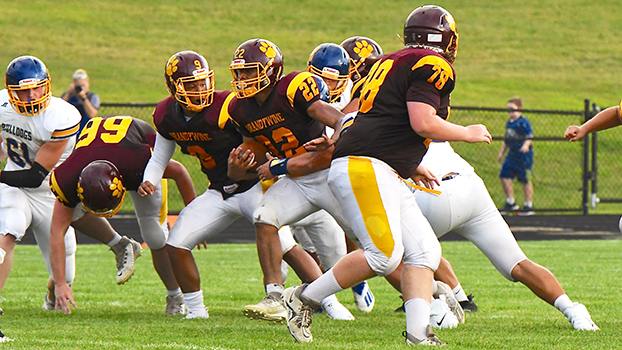 Ivory McCullough and the Brandywine Bobcats hit the road Friday night to face Union City in the first round of the state playoffs. (Leader photo/KELLY SWEENEY)

The Bobcats (4-5) are one of just 17 teams to have qualified for the playoffs with a losing record.

However, Brandywine Coach Mike Nate knows that because he team faced seven opponents that reached the playoffs, his team has been battle-tested and is ready for the Chargers, who enter the game at 5-4, having won three straight contests.

“They said on the selection show that we played seven playoff teams, and they were right,” said Brandywine Coach Mike Nate. “All nine teams we played were good. It was a tough schedule. That was done by design. We strengthened the schedule so we could be better in the second season.”

The Chargers are led by running back Garrett Iobe, who rushed for 1,038 yards this season and scored 13 touchdowns. Four of those touchdowns came in the regular-season finale against Manchester as he led the Chargers to a 34-21 victory.

The Bobcats also like to run the football. Brandywine is led by running back Ivory McCullough, who has 1,007 yards this season with 12 touchdowns. Against Benton Harbor last Friday night, McCullough ran for 143 yards on 36 carries and scored three touchdowns. Michael Palmer has rushed for more than 700 yards this season, which gives the Bobcats a two-pronged running attack.

“We are pretty happy about how everything played out,” Nate said. “We are focused on Union City, but we know just how good Lawton is having played them Week 5. We are not thinking about them one bit, but we know they are in our district. We are going to have a good week of practice, and then we are going to head over there. We have always played pretty good on the road.”

Kickoff at Alumni Field is scheduled for 7 p.m.