Trio of area teams find out their playoff opponents 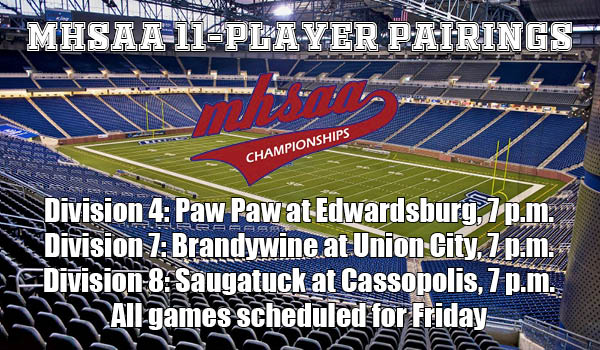 Edwardsburg and Cassopolis were awarded home games in the opening round of the state playoffs, while Brandywine, with its a 4-5 overall record, will hit the road for its first game.

One team that thought it would make its first playoff appearance since 2003, Niles, was left on the outside looking in as several schools leap-frogged the Vikings on the final night of the regular season.

The Eddies (9-0) are the No. 1 seed in their Division 4 District, entirely comprised of Wolverine Conference schools. Edwardsburg won the conference championship again this season with an 8-0 record and wins over first-round host Paw Paw (57-14), Three Rivers (55-0) and Vicksburg (49-0)

The Bulldogs (8-1) will face their long-time rival, the Wildcats (5-4), in the first round of the districts. Vicksburg defeated Three Rivers 46-27 during the regular season.

Edwardsburg, the No. 3 team in Division 4 with 64.889 playoff points, never faced a strong challenge throughout the regular season as it outscored its opponents 495-42. The Eddies pitched five shutouts and never allowed more than two touchdowns in a single game. The Red Wolves’ 14 points were the most scored against Edwardsburg in any single contest.

While Edwardsburg Coach Kevin Bartz said he would not mind seeing other teams in the playoffs other than the conference schools the Eddies compete against every year, already knowing their first-round opponent, and a potential second-round opponent, cuts down on the time studying film.

“In terms of getting prepared, you already played them once, so you have a pretty good idea of what they are going to do,” he said. “There is a little bit less preparation time, but it is always tougher to play somebody a second time.”

The Eddies will be as healthy as they can be at this point in the season, Bartz said. The exception is that he recently found out that junior running back Brett Allen has been lost for the rest of the season due to an injury. Allen had rushed for 268 yards on just 23 carries and scored four touchdowns. He also had a receiving touchdown.

“That hurts us on both sides of the ball,” Bartz said of Allen.

In January, Edwardsburg was upset by Cadillac 28-26 in last year’s semifinals, which was played at Leo Hoffman Field.

Brandywine used the new MHSAA playoff formula to perfection despite having a losing record. The Bobcats qualified in Division seven thanks to playing a brutal regular-season schedule that featured seven playoff teams.

“All nine teams we played were good,” said Brandywine Coach Mike Nate. “Buchanan was good, and Benton Harbor is full of athletes. They were the only two teams that didn’t make it. It was a tough schedule, and that was done by design. We strengthened the schedule so we could be better in the second season.

The Bobcats got off to a quick start this season, defeating defending Division 8 state champion Centreville (38-32) and playoff-bound Cassopolis (30-34). Then came a tough stretch of games for Brandywine, who ended up losing four consecutive games and putting its playoff hopes in jeopardy.

The Bobcats were defeated by playoff teams Saugatuck (42-20), Sand Creek (62-34), Lawton (63-14) and South Haven (24-22). Brandywine was able to squeak out a 12-6 overtime victory over arch rival Buchanan before losing to undefeated Berrien Springs, which won the BCS Athletic Conference championship.

“We have had some good seasons, but never played well in the playoffs,” Nate said. “Maybe this year we will do a little better in the playoffs because we were tested by playing seven teams that made the playoffs. We are pretty happy to be in it.”

A victory over Benton Harbor (44-32) gave Brandywine enough points to move into the postseason. It will be the Bobcats’ seventh playoff appearance in the last 10 years.

Another team that beefed up its schedule to help its chances to make the playoff was Cassopolis, which has now reached the postseason in 14 of the last 15 years.

The Rangers will host Saugatuck at William F. Scott Field at 7 p.m. Friday night. Cassopolis and Saugatuck are no strangers to playing each other in the postseason, as they met in 2017 with Trailblazers coming away with a 7-6 victory on its way to the Division 7 state championship game.

Cassopolis Coach Steve Green and his staff were caught off guard by the MHSAA when it announced they were playing the Trailblazers.

“In the coaches’ meeting [Sunday], a lot of time was spent on White Pigeon and Centreville, to be honest with you,” he said. “They were who we assumed we would get in the first round. Saugatuck wasn’t even on our radar.”

The Rangers won three of its first four games, the only loss coming at the hands of Brandywine, before dropping two straight to Southwest 10 Conference foes Centreville and White Pigeon. Cassopolis received a forfeit from Lakeview before wrapping up the season Friday night with a loss to Berrien Springs.

The forfeit by Lakeview in Week 8 may have been a blessing in disguise for the Rangers, who were nursing some injuries down the stretch.

“We healed up a bit, but the only problem is, when you play a Berrien Springs, you come out beat up,” Green said. “I am not sure about Reggie Hart. We may have lost him for this week. He is our starting middle linebacker and halfback. That would be a big loss. We will find out [Monday] what he can do for us this week. Everybody else should be healthy.”

Five of the Rangers’ nine opponents qualified for this year’s playoffs.