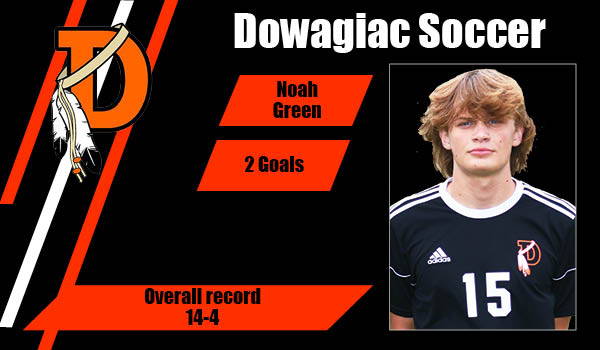 DOWAGIAC — Defending Division 3 District soccer champion Dowagiac had to rally twice to force a 3-3 tie with Watervliet when the title match was stopped before the start of overtime due to darkness.

The match will resume at 5 p.m. Friday. There will be no admission charge.

The Chieftains and Panthers will play a pair of 10-minute overtimes with five minutes in between. If the score is still tied, a shootout will decide the champion.

The Panthers (18-2) took a 2-0 halftime lead on Dowagiac (14-4) on a pair of goals by Nathan Isbrecht. Isbrecht’s second goal came with one second remaining in the first half.

The Chieftains, who are the four-time defending district champions, regrouped at halftime and scored the second half’s first goal with just over 29 minutes remaining when Allex Hernandez found the back of the net.

Isbrecht completed the hat trick to give Watervliet the lead back at 3-2 with 11 minutes remaining.

Green tied the score at 3-3 with 2:03 left in regulation. Neither team had a serious scoring chance in the final two minutes.

The two teams battled each other and the elements as it was cold, windy, and rainy throughout the match.

“Tomorrow, we need to stay tighter to our marks in the midfield and not let their forward get the ball,” he said.

The winner will advance to the Delton-Kellogg District in the Holland Christian Regional on Wednesday. Defending district champion Hillsdale will face host Delton-Kellogg Saturday for the championship.