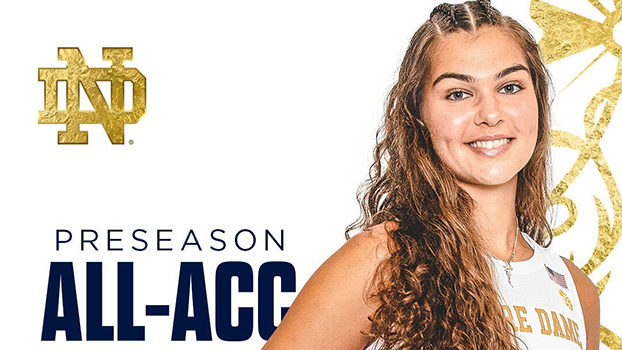 However, Westbeld was not the only Notre Dame player honored as both freshmen, Olivia Miles and Sonia Citron, made the five-player ACC Newcomer Watch List.

In addition to being named Rookie of the Year last season, Westbeld was also an ACC First-Team selection along with being a WBCA All-America Regional finalist. Her 15.2 points per game ranked third all-time for a freshman at Notre Dame.

Amongst all ACC freshmen last season, Westbeld finished first in scoring, second in rebounding, second in steals, fourth in assists and fourth in blocks. Furthermore, she was the only freshman in the country to average at least 15 points, 7.5 rebounds, 2.5 assists and 1.4 steals.

Fans and media alike, got a sneak peek at freshman Olivia Miles last winter, for she was the program’s first-ever early enrollee. Miles ended the season with five straight games in double figures, averaging 10.4 points per game in that span.

Then there’s fellow freshman Sonia Citron who had a productive summer winning gold with the U19 USA Team during the 2021 FIBA World Cup. Citron made the All-Star Five Team and averaged USA second bests of 14.3 points per game and 7.7 rebounds per game overall in Hungary.

The 2021-22 home slate kicks off [after an exhibition contest on Nov. 1] with Ohio on Tuesday, Nov. 9, followed by Western Illinois on Thursday, Nov. 11, and another pair of non-conference opponents in Fordham (Thursday, Nov. 18) and Bryant (Sunday, Nov. 21).