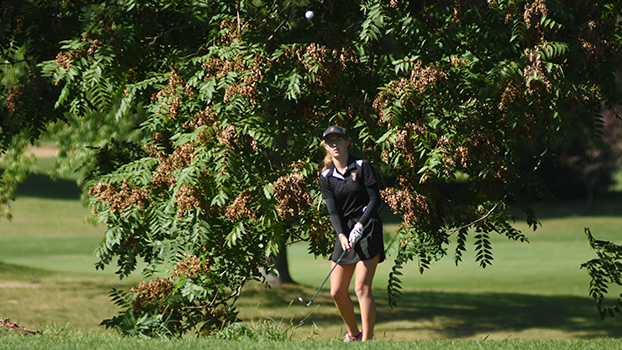 The Dowagiac golf season came to an end Tuesday at the Division 4 Regional. (Leader File photo)

KALAMAZOO — The Dowagiac girls golf season ended Tuesday as the Chieftains failed to qualify for the Division 4 state finals.

Dowagiac finished sixth at the Division 4 Regional at Milham Park Golf Course in Kalamazoo. Only the top three teams, plus the three individuals with the lowest scores not on a qualifying team, advance.

Calvin Christian’s Andrea Diemer was the medalist as she finished with an 88.

The top three individual qualifiers were Kayla Collins, of NorthPointe Christian, with an 89, Sydney Barnes, of South Haven, with a 90, and Haley Earles, of Schoolcraft, with a 93.

Dowagiac’s Calley Ruff, the only senior to play on Tuesday, missed qualifying for the state finals by three strokes as she carded a 96.

“Nasty day,” said Dowagiac Coach Bob Turner. “Lots of highs and lows. Calley finished fifth, got a medal for top five, but didn’t qualify. I thought it was an oddity when Rebecca Franklin finished sixth and didn’t qualify twice. Fifth is tough.”

According to Turner, they thought she was headed to a playoff for the final qualifying spot when Ruff finished her round. However, on the ride back to the clubhouse, they learned that the third and fourth place teams had flip-flopped, and she was out.

Besides Ruff, the Chieftains got a 100 from Rebecca Guernsey, a 117 from Anna Ironside, a 120 from Carlee Spagnoli, and a 122 from Josie Lock.