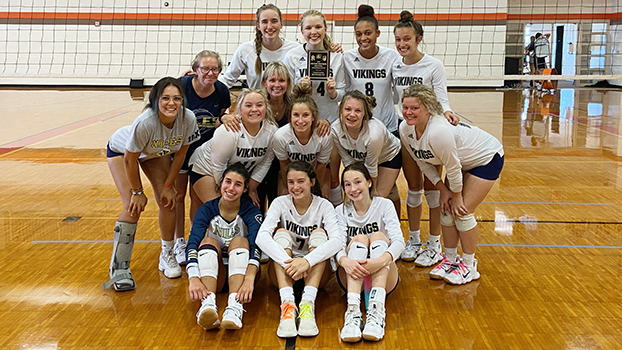 PORTAGE — After blowing through several familiar foes in pool play at the Portage Northern Invitational, the No. 8-ranked Niles volleyball team took the top seed into the championship round of the Gold Division Saturday.

“That last match against Unity Christian really challenged us, and those are the matches we learn the most in,” said Niles Coach Jenny Nate. “We will spend some time digging into film study and will be back in the gym on Monday to prepare for a conference match at Vicksburg this week.”

In the Gold Division quarterfinals, the Vikings defeated Okemos 25-13 and 25-13 to advance to the semifinals, where they defeated the host Huskies 25-21 and 25-21.

“Today was a great day for my team,” Nate said. “They are working hard to add some components to our offense, and it was exciting to see them really execute today and maintain control of the runs in order to beat the first five teams we faced in two sets. One of our goals this weekend was to make sure we pull out the lead in each set and then close the door on the opponent. We faced some strong teams today with some faster offenses, and I was really pleased with how fast our block was able to adjust and stop them/slow down the attacks. And our defense made some incredible plays that were as exciting to watch as some of our great offensive attacks.”

Defensively for the Vikings, Cadence Knight had 81 digs, while Amelia Florkowski had 65 digs and Kailyn Miller 40. Emma Beckman led the team in scoring with 50 points and seven aces. Anna Johnson added 30 points and four aces, while Miller had 27 points and six aces.

Beckman and Johnson had 58 and 41 setting assists, respectively.

“All of our setters really spread the ball around and worked hard to get our veteran and newer hitters involved,” Nate said. “I see their trust in each other getting better match after match, and that results in better win margins.”

Niles will travel to Vicksburg for a Wolverine Conference match, where it will put its 4-0 record on the line.

Buchanan reached the semifinals of the Silver Division before being eliminated by Edwardsburg 25-21, 23-25 and 15-13.

Hailey Jonatzke led the team with 25 digs. West had 19 digs, while Alea Fisher and Lauren Strefling both had 15 digs.

Buchanan returns to the court Wednesday as it heads to Three Oaks to take on River Valley.