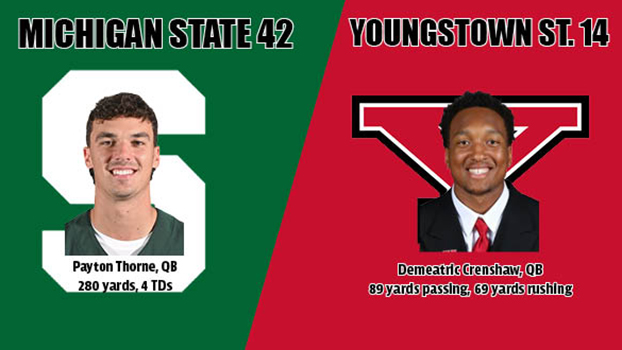 Thorne’s favorite receiver on the day was Jayden Reed, who hauled in four catches for 181 yards and two TDs. Jordon Simmons led the Spartans on the ground with 121 yards on 16 carries.

In the second quarter, Xavier Henderson led the defense with eight tackles, including a 4-yard sack and an acrobatic interception.

For the second consecutive game, the Spartans (2-0) scored on the first play, this time on a 75-yard pass from Thorne to Reed. Last week in the season opener at Northwestern, Kenneth Walker III raced 75 yards for a score on the MSU’s first play from scrimmage. In limited action on Saturday, Walker had seven carries for 57 yards (8.1 average) and one touchdown a week after accumulating a career-high 264 yards on the ground against the Wildcats.

Thorne upped MSU’s lead to 14-0 midway through the first quarter as he scampered 10 yards into the end zone at the 7:54 mark.

Henderson prevented a potential Youngstown State scoring drive early in the second quarter with an acrobatic interception at the 2-yard line. Three plays later, Thorne connected on an 85-yard touchdown pass to Reed, the 11th longest in MSU history. Reed caught the ball at the MSU 47 and sprinted 53 yards to the end zone to put MSU on top, 21-0.

On MSU’s fourth scoring drive of the game, Elijah Collins had three straight carries for 32 yards, then took a screen pass on the fourth play 20 yards for a touchdown for his first career receiving TD, making it 28-0 in favor of the Spartans.

Youngstown State got on the board with 4:10 left in the second quarter on a Demeatric Crenshaw 6-yard TD score, but the Spartans responded with an 11-play, 68-yard drive to close the half, capped by a 6-yard run by Walker.

The Penguins (1-1) scored on their first possession of the second half as Christian Turner went 26 yards for a touchdown.

Thorne found Jalen Nailor for a 16-yard pass in the end zone at the 4:32 mark of the third quarter for Thorne’s fourth TD of the game.

Michigan State returns to action Saturday at Miami. The Spartans and Hurricanes will kick at noon. The game will be televised on either ABC or ESPN.