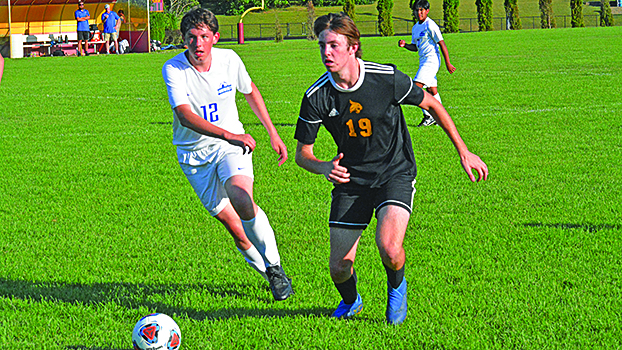 The Bobcats scored three first-half goals on their way to an 8-0 BCS Athletic Conference victory over the Bison.

Duane Thompson, Hunter Inman and Pedro Segundo tallied two goals apiece and Andrew Schadler and Jacob Sherrick added goals of their own for the Bobcats, who defeated Howardsville Christian 2-0 on Tuesday.

“We wanted to get everybody playing time,” said Brandywine coach Caleb Adams. “We wanted to try and play our game. Yesterday we played Howardsville Christian and we had a lot of guys trying to take one on nine and dribble against the whole team, so we tried to slow it down. We tried to possess the ball today and passed around and get everybody minutes on the field.”

While the score may have been lopsided, Adams believes this game will pay dividends as the team heads into the meat of conference play.

“A game like this is much better than practice,” he said. “Getting another team out here and getting everybody out was what today was about. We have some new players that have come out so we wanted everybody to get touches on the ball. We had some good position play today.”

With Wednesday’s win on tow, the Bobcats sport a 4-3 record, including a 3-2 record in BSC play, good for third place. Adams likes what he’s seen from his team so far and is optimistic about where his team stands in the BCS.

“We’re looking good in the conference,” he said. “We’re pretty confident about that. We’re getting back healthy, and that’s where we want to be when we play some of these tougher games. It’ll help with this bench getting a little deeper, but yeah, we want to be playing our game when we roll into the tougher conference games.”