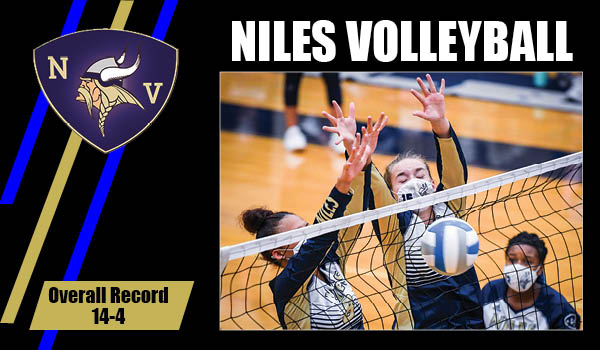 NILES — For the fourth time in five days, the Niles volleyball took to the court for a tournament.

This time the Vikings traveled to Hamilton for a quad featuring No. 7-ranked (Division 2) Grand Rapids Catholic Central, Zeeland East, a Division 1 school, and the host Hawkeyes.

Niles went 2-1 to raise their season record to 14-4. The Vikings are ranked No. 11 in the Prep Dig ratings.

“We travel to this quad every year because we know we will be pushed out of our comfort zone,” said Niles Coach Jenny Nate. “Coming off of a 5-0 night last night, it was perfect timing to make sure that we have to turn around and continue to be pushed to constantly have to make improvements in our game in order to pull out the wins. We have to stay aggressive and keep moving forward at all times. We have to add to our level of play each day. Grand Rapids Catholic Central had some very tough hitters, and they forced us to make some adjustments defensively that we hadn’t been challenged to make this year.”

Nate took the blame for the loss.

“So, as a coach, I take responsibility for that loss and have to make sure that I do a better job preparing my players for that offensive prowess in the future,” she said. “And even though we lost that match, that is when we learn the most, and we will be able to make those adjustments in the future. Overall, it was a great night, and coming away 2-1 against some tough teams, and upping our play is definitely worth the trip. If we want to win at the highest level — we have to keep playing the teams at the highest level.”

There is no rest for the Vikings as they open up play in their new league, the Wolverine Conference, Wednesday night by hosting Sturgis. The match is scheduled to begin at 6 p.m.

“My team is very excited to host our first Wolverine Conference match tomorrow night against Sturgis on our home court with fans,” Nate said.

“At the home quad tonight the girls came out a little nervous and slow the first game,” said Niles Coach Carly Barton. “We let the other team get a lead on us but we picked it up and had a close game all the way to the end. The girls really showed up in the last two matches. We gained some confidence tonight that we will carry the rest of the season.”

Complete statistics can be found online at leaderpub.com.