At a special meeting last September, the SMC Board of Trustees unanimously authorized the administration to pursue the return of National Junior College Athletic Association men’s and women’s cross country for fall 2021. The NJCAA approved SMC’s return to intercollegiate athletics, and in May of this year, the board authorized the revival of men’s basketball, women’s basketball, volleyball and wrestling for fall 2022.

Davis will be working with senior administration to build SMC’s athletic department from the ground up, hiring coaches for the other sports to round out the staff, establishing policies and procedures to ensure compliance with all NJCAA and MCCAA regulations, consulting on the college’s extensive upcoming gymnasium renovation project and recruiting men’s basketball players for the first roster since the 1996-1997 season. 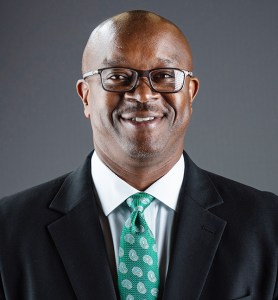 A native of Dixmoor, Illinois, SMC’s new AD played Division I basketball for Dr. Tom Davis at the University of Iowa, where he earned his bachelor’s degree in 1992. While Davis was an assistant coach at Drake University, the Bulldogs finished 28-5, winning the Missouri Valley Conference regular-season and tournament championships and finishing #14 in the final Associated Press poll.

While an assistant at Providence College in the Big East Conference, Davis helped coach the Friars to an upset win over No. 1 Pittsburgh and set the school record for wins (19) by a first-year staff. Davis also served as an assistant coach on Porter Moser’s staff at Loyola University-Chicago.

Davis has more than 10 years of experience coaching and leading at the junior college level. He was head coach/athletic director from 2003 to 2007 at Laramie County Community College in Wyoming, winning the Region IX Central Championship in 2006. He also served as athletic director at Kennedy-King College in Chicago for six years, reaching the Region IV Championship game in 2015.

From 2016 to 2018, concurrently with his responsibilities at Kennedy-King College, Davis was an assistant coach at Morgan Park High School, helping that team win two Illinois High School Association 3A Championships. All 10 seniors on the 2018 team received athletic scholarships and five of them went on to play at the Division I level. Most recently, Davis served as associate head coach at Chicago State University, a member of the NCAA’s Western Athletic Conference.

“We are so pleased that Rodell has agreed to join the college in this capacity,” said President Dr. Joe Odenwald. “He is a proven winner at the high school, junior college and NCAA levels, but more importantly, he is an educator who will mentor our student-athletes and teach them positive values to carry forward with them throughout their lives.”

“I want to thank Dr. Joe Odenwald for entrusting me with this opportunity,” Davis said. “We will work tirelessly and build the Athletic Department in a first-class manner. Our main goals will be a 100-percent graduation rate, preparing our student-athletes for life and winning with class while competing for championships. We will also create a culture on campus that gives our student-athletes everything necessary to have a great experience academically, athletically and socially.”