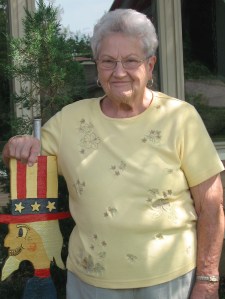 Ruth was born in Chicago in 1925 the only child to her parents, Anton George Shtukas and Virginia E. Shtukas (Poplar).  She spent the earliest years of her life in Chicago but moved out to Clear Lake in Buchanan during the Depression.  Her daddy died in a car accident in 1940 when she was just 15 years old. She lost her mother in 1976.  Ruth was a 1943 graduate of Buchanan High School.

She left for Massachusetts in 1943 to wed her first husband, Ditlef Joesph Lagoni. She was 17 years old and had permission from her mother to marry. Her husband had joined the submarine service at age 17 in 1941. He spent almost six years with the Navy. Her first son was born here in Niles in 1945, Lance Lagoni. Her husband then joined the army to be involved in the Korean conflict. She moved to Japan to be closer to him. Her second child Ruth Lynn Lagoni was born in Osaka Japan in January 1949.  As things heated up with the war, her husband had asked her to take the kids and come home. She moved back to the family home at 17th South 10th St. in Niles.

On Aug. 10, 1950, she received word that her husband had been taken as a prisoner of war.  He was officially declared dead February of 1954. He is a POW-MIA as no remains have yet been found. She worked at a Niles bank, helped at a Buchanan restaurant occasionally,  worked at Studebaker’s in South Bend, and   the County Clerk’s office for an unspecified amount of time. She had met Gerald Stephan Pridavka (affectionately known as “Monk” around town) and married him on Aug. 7, 1954. In September of 1955, she gave birth to her second daughter, Jill Pridavka.  January of 1957, she gave birth to her second son and last child, Gary  Pridavka.

About 1965, Ruth took a job at St. Mary’s in Niles. She remained there for many years, as the parish secretary until her retirement. She lost her second husband Monk to lung cancer in March of 2000 after 46 years of marriage. Ruth lost her first daughter Ruth Lagoni in January of 2013 to COPD and MS.

In her retirement, she volunteered at Pawating/Lakeland Hospital, Lakeland Hospice and worked on the War Memorial at Riverfront Park. She loved Niles. She lived in her home on 10th Street for more than 60 years. She and her daughter, Ruth Lagoni, moved to Texas in 2008. In 2015, at age 89 she had a triple bypass and recovered with flying colors. She has three grandchildren belonging to Gary Pridavka, Chase, Julia and Garrett.  Lance Lagoni has two stepdaughters (with his wife, Joann), one of which has two children, who are considered close family. Mike and Lil Pridavka live in Buchanan. Mike was a brother-in-law to Ruth.

June Cleaver had nothing on Ruth Pridavka! You could have never hoped for a finer wife, friend or mother. The things she held true and believed in back in the 1940s she felt the same way about in 2021. She lived through the Great Depression, five wars, losing many loved ones, the pandemic, and numerous changes in our society.  She prepared all four of her children for the next level of life. No one left the home without knowing how to shop, iron, clean, cook, do laundry, and be financially responsible. Her family was always her priority in life. She was in fine physical condition, but Alzheimer’s robbed her of more years on earth. She was 95 years young. She died at her home away from home in Garland Texas. Michigan will forever be her real home.  “There is no other like my mother.” She is so sadly missed, more than written words can express.

Laura Clark, 69, of Niles, died Tuesday, July 20, 2021. Arrangements are being made by Halbritter Wickens Funeral Home, of... read more