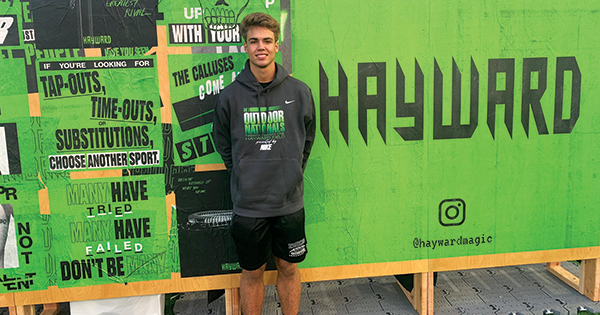 Edwardsburg’s Luke Stowasser competed at the 2021 National Scholastic Athletic Foundation’s The Outdoor Nationals at Hayward Field at the University of Oregon from June 30 to July 3. The Nationals is an annual track and field meet featuring some of the best high school athletes in the country. (Submitted photo)

Fresh off earning Division 2 state championships in both high jump and long jump, the senior track star recently represented Edwardsburg at the 2021 National Scholastic Athletic Foundation’s The Outdoor Nationals at Hayward Field at the University of Oregon, placing eighth overall in the high jump with a leap of 6-8.25.

“It was an honor to be out there,” He said. “I wasn’t too nervous. Being a part of  that and being able to compete against the best of the best was a great feeling.”

The Nationals, an annual track and field meet featuring some of the best high school athletes in the country, took place from June 30 to July 3. In addition to high jump, Stowasser also competed in long jump and placed 25th overall with a jump of 21-8.

“I went out there and competed well,” Stowasser said. “The other guys competed as I expected them to. It was a chill competition and wasn’t nerve-wracking. I had a great time out there.”

When he was not competing, Stowasser soaked up the Oregon campus as much as possible.

“We toured the place,” He said. “The facility there is awesome, they have a brand new stadium, too.”

The top eight finish at nationals is just the latest achievement for Stowasser, who set school records in both the high jump (6-10) and long jump (22-6.5) at the Division 2 regional meet in May. Stowasser’s record high jump was the highest jump in the state this year and his long jump was third overall. According to Athletic.net, his 6-10 high jump is tied with several athletes for 14th place, nationally.

Entering his senior year, Stowasser will be the No. 3-ranked high jumper in the country based on his personal record. After a strong showing at nationals, he has his sights set on being No. 1 next year and jumping seven feet.

“Being eighth in the nation was a great feeling,” He said. “It shows me that I have the potential to be No. 1 next year. That’s what I’m going to push myself to become.”

In addition to track, Stowasser plays both football and basketball for the Eddies and plans to compete in indoor track as well. He hasn’t made a collegiate decision yet but Stowasser has been in talks with jump coaches from Division 1 track and field programs from Michigan and Purdue.

“I’m looking to go into aviation,” He said. Purdue is high on my list because of its aviation program. I’m looking for good standards in both academics and athletic programs.”