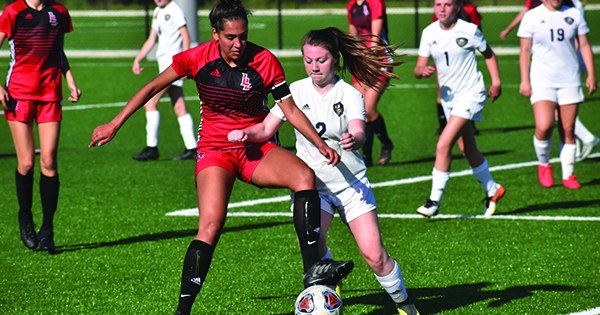 Amelia Florkowski (2) battles with a Lakeshore player for control of the ball during Niles’ 8-0 loss to the Lancers in Division 2 District play Wednesday. (Leader photo/MAXWELL HARDEN)

STEVENSVILLE — The Niles girls soccer team’s hot streak came to an end at the hands of Lakeshore Wednesday night.

“We never gave up,” said Niles coach Abel Fonseca. “We played through the whole game as hard as we could. Hats off to Lakeshore; they’re very talented. It didn’t go the way we wanted it to today, but we never gave up.”

The Lancers went to work early, scoring three goals in the first eight minutes of play before taking a 5-0 halftime lead. Lakeshore’s defense prevented Sydney Skarbek and Kamryn Patterson from getting many good looks at the net.

“Defensively, we’ve been strong,” said Lakeshore coach Brian Samuel. “They continue to be locked down and stay compact. Offensively, Jennah got back to scoring up-top. It was nice to see a freshman get the hat trick.”

According to Samuel, Niles’ defense made it difficult to get in a rhythm on offense.

“I’ll give credit to Niles,” he said. “They really packed in front of the net. It was a good game plan by Abel to put three in front and deny us a lot of scoring opportunities because of it.”

The loss ends a turbulent season for the Vikings, who finished with a 9-10 record after starting the season 3-9 and battling COVID-19 and its protocols. Fonseca is proud of the way his team overcame adversity.

“At the beginning, it was tough,” he said. “The late start got to us, and like every school and soccer program in the state, we got hit by COVID and were down players. We played four or five games with 10 to 11 players. Hats off to the Niles’ program and all of the other schools for making sure we’re doing all of our testing and to be able to push forward.”

Fonseca believes that he will remember this year’s group of girls for its heart and toughness.

“Heading into this season, we didn’t know what we were gonna get,” he said. “From where we started to where we finished, we took a big step in progression as a team. I’m pretty happy with the way the season turned out. Even though we lost tonight, we did pretty well for our season and program.”