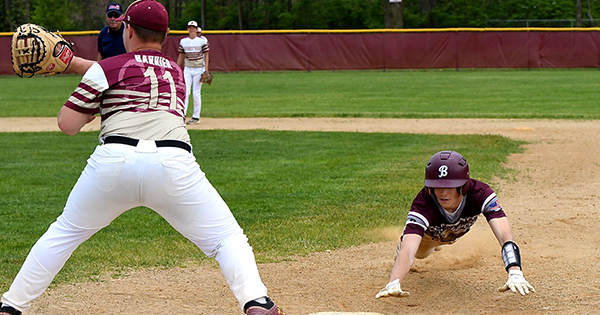 Visiting Buchanan won both games of its BCS Red Division doubleheader with Brandywine to lock up the division title Tuesday. (Leader photo/KELLY SWEENEY)

NILES — The Buchanan Bucks continue to mow down their opponents this season.

The latest victim was rival Brandywine, as the Bucks swept a BCS Athletic Conference Red Division doubleheader from the Bobcats Tuesday. Buchanan won the first game 4-1 and then completed the sweep by taking the nightcap 10-0. The sweep gave Buchanan the BCS Red Division title.

Buchanan (23-2) scored two runs in the first and two in the seventh to pick up the win in the opening game. Brandywine’s lone run came in the sixth inning.

The Bucks outhit the Bobcats 9-7 in the contest.

Matthew Hoover was 3-for-4 with an RBI. Macoy West added a pair of hits and drove in a run.

Jack Branch went the distance to pick up the victory for Buchanan. He struck out 12 and did not walk a batter.

Cam Barrier was 2-for-3 to lead the Bobcats offensively. Jamier Palmer had a double.

Gabe Gouin started for Brandywine, but was relieved by Owen Hulett, who took the loss.

In the nightcap, the Bucks used a five-run third inning to break open the close contest.

Buchanan had 11 hits in the game, including three by Keeghan Pelley, who doubled and drove in a run. Cade Preissing was 2-for-4 with a double and an RBI. Murphy Wagner drove in a pair of runs for the Bucks.

Matthew Hoover picked up the win as he worked the first six innings, striking out 10 and giving up a pair of hits. West worked the seventh inning.

James Vaughn had both hits for the Bobcats, who dropped to 16-8 on the year.

Tyler Deming was the starting pitcher for Brandywine. Three other pitchers took the hill for the Bobcats in the contest.

“I thought we competed well today, overall,” said Brandywine Coach David Sidenbender. “They [Buchanan] are a very good team as they have been for some years now. We have to cut out the little mistakes and lapses in concentration during close games. Overall, I am happy where we are at right now.”

Sidenbender knows his team has its work cut out for it come district time. The Bobcats drew the pre-district game against host Bridgman June 1.

“We have one of the toughest districts in the state as always,” he said. “With the possibility of four teams with 20 wins by season’s end, it will be a challenge.”