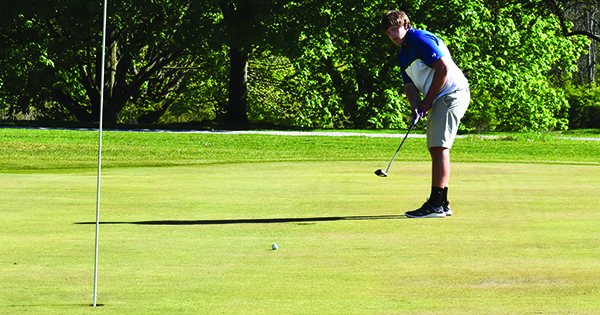 NILES — It was not a pretty win, but the Niles boys golf team will take it.

The Vikings took first place in Thursday’s BCS Jamboree held at Plym Park with a score of 181.

George Pullen led Niles with a score of 42 and Matt McKeel was second after firing a 44. Evan Bruckner scored a 44 and Aiden Krueger a 51.

Buchanan’s John Gartland was the medalist with a score of 40. Ethan Valentine fired a 44, Logan Carson 51 and Nick McKeon 64. According to Buchanan coach Christopher Watkins,

Gartland was very close to achieving a hole-in-one.

“He was about one foot away from one,” he said. “That was a lot of fun. It seemed like everyone enjoyed themselves, it’s a fun course to go get some strokes and be competitive. There was a lot of good golf today.”

Watkins said Gartland and Valentine have been the Bucks’ top golfers all season and among the best in the conference.

“Those two are really good,” he said. “They’ve been competing for all-conference spots all season. They shot a good score when they needed to.”

Jaedon Waggoner led Brandywine with a score of 57 and Ben McKee fired a 60. Wes Marlin had a 63, and Daniel McKee added a 64.

“Out of all the courses we’ve been to this year, you’d think just by looking at Plym that it’s probably the easiest,” she said. “But if you’re not a straight-ball hitter, and you stray left or right, either way, you get into trees. I think it’s more challenging than what golfers thought.”

The three teams will attempt to use the jamboree as a learning experience ahead of the upcoming BCS and regional tournaments.

“We just have to keep practicing and keep getting better,” Brawley said. “If everyone can get a little bit better every day until regionals, I think we have a chance.”

BERRIEN COUNTY — Following the recent authorization and recommendation by the U.S. Centers for Disease Control and Prevention and the... read more