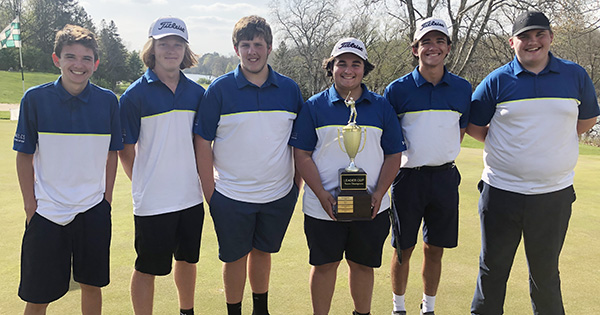 BUCHANAN — For the first time in four years, the Leader Cup has a new champion.

Edwardsburg has dominated the Leader Cup since its inception in 2016. The Eddies had won three of the previous four titles. There was no Leader Cup in 2020 due to no high school sports during the COVID-19 pandemic.

Tuesday, the Vikings, led by medalists George Pullen and Aiden Krueger, who shot a 36, posted a team score of 269, which was 10 strokes better than the Eddies’ 279, during the alternate shot and best ball format.

Buchanan finished third with a team score of 348, while Brandywine was fourth with a 355 and Dowagiac fifth with a 375. Cassopolis did not compete in this year’s event, sponsored by Leader Publications, due to its playing in a Southwest 10 Conference jamboree.

Matt McKeel and Trenton Phillips led the Vikings with an 88, while Pullen and Krueger finished with an 86. The pairing of Evan Bruckner and Kade Delinski shot 95.

Edwardsburg was led by Ethan Emanaker and Andrew Kurowski, who shot a 90. Mason Crist and William Moore finished with a 94, while Carson Manfred and Aiden McCue shot 95.

Buchanan was led by the team of Ethan Valentine and John Garland, who finished with an 84. Nick McKeen and Logan Carson shot 109, while Quinten Ruff and Michael Wentworth finished with a 155.

Brandywine, which only had four players, had a pair of Niles players join their squad for the competition. Daniel McKee and Wesley Marlin led the team with a score of 108. Jaedon Waggoner and Ben McKee shot 132. The Niles duo of Dakota Hinkle and Tyler Miller finished with a 115.

“Only one of my guys had had walked 18 holes before today,” said Dowagiac Coach Bob Turner. “They are tired, but it was fun.”