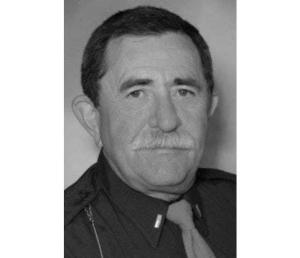 He was born on August 24, 1945, at the same Niles hospital to Joseph C. and Mae A. (Starke) Sherrick. He was graduated from Niles High School and continued his education at Indiana University where he earned a bachelor’s degree in criminal justice. In 1968, he enlisted in the U.S. Army, serving as a sergeant in the Military Police Corps. He was stationed in Vietnam for most of 1970, earning the Vietnam Campaign Medal for longevity in-country, and the Bronze Star Medal for meritorious service in a combat zone, and was honorably discharged as a veteran of the Vietnam era.

He returned from military service to Niles and was a sworn officer in the Berrien County (Michigan) Sheriff’s Department. He moved up through the ranks and led the Sheriff’s Marine Division as Lieutenant until his retirement in 2005.

Ed had been a member of the First Presbyterian Church in Niles, and was a member of the Fraternal Order of Police Lodge #95 in Niles. He enjoyed cooking, and was well-known for his personal style of pizza, always trying the latest recipes and ingredients. He spent much off-duty time in Michigan’s Upper Peninsula, adding to the population of Trout Lake, where he was preparing to open a pizza parlor.

He was preceded in death by his parents, Joe and Mae Sherrick, and by an infant son, who died in 1975.

The family of Ed Sherrick will gather with relatives and friends on Sunday, April 18, 2021, from 1 until 4 p.m. at the Niles FOP Lodge, 531 North State Street in Niles to share memories and honor his life. At 4 p.m. the U.S. Army Honor Guard will perform the Veteran’s Flag Presentation and “Taps”. Attendance is limited, masks required, and social distancing practiced.

Contributions in memory of Ed may be made to the Berrien County Law Enforcement Memorial, c/o Berrien County Sheriff’s Department, 919 Port St., Saint Joseph, Michigan, 49085. Arrangements were made at the Halbritter-Wickens Funeral Home in Niles. Online condolences may be left at: halbritterwickens.com.

Ed dedicated his life to service, in the military, in education, and in vocation, daily protecting the public. He also protected and loved those closest to him, Sandy and the boys, and his grandchildren. All a testimony to the greatest call of all: to love people and love God.