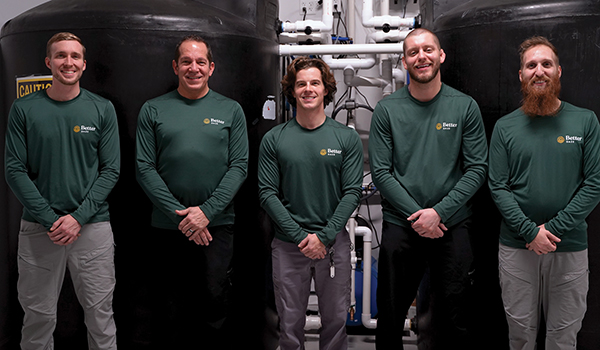 NILES – A local marijuana business is growing even greener after about a year in business.

MichiCann, 1760 Renaissance Dr., Niles, has transformed its branding with a sunny logo to “Better Daze.” In addition, it is expanding its operation by 2,000 feet to better accommodate its total 1,000 plants.

One of five owner-operators of Better Daze, Tony Gryzwana, said part of the reason for the rebrand has to do with the company’s approach to marijuana.

“We are always saying ‘it’s going to be a better day’ or we are ‘hoping for a better day,’” Gryzwana said.

He said company wants its product to be a part of those days.

The company has had some good days of its own.

In October 2020, the planning commission granted MichiCann its special land use request to expand its business. Now, after six harvests, the business expansion is in motion.

“Our addition will give us more space to grow the total plants we can have,” Gryzwana said. “Right now, we only have 500 fully mature plants. We don’t have to space to grow all 1,000 to full maturity.”

The addition has been purchased, Gryzwana said.

“The equipment and steel is coming,” he said. “It’s been quoted as a six- to eight-month turnaround. We are hoping to have everything, from erecting the building to outfitting all electric, HVAC and ready for growing [done.]”

The cultivation at Better Daze is also EnvirOrganic certified.

“They come in and make sure we are organically growing. There’s a lot of places that say they are organic. [EnvirOrganic] comes through and checks all of our nutrients,” Gryzwana said. “They actually take plant samples to make sure there are no synthetics and/or pesticides on them. The end user can know that this is really 100-percent organically grown, clean product.”

The company currently has five owner-operators at the moment, and Gryzwana is one of the caregivers of the plants.

“My lead grower and partner started caregiving [marijuana] plants for medical patients,” Gryzwana said. “He taught me the ropes of growing. I’ve always had gardens, like vegetable gardens. It turned into something we love to do and our patients, and customers love the organically grown product.”

As the addition is built and the operation grows more, Gryzwana said the company is extending its branches out into the community as well. The company is co-sponsoring on an upcoming disc golf tournament in the works for the Niles area with Green Stem Provisioning Center, working to support Spero House’s local efforts and hopes to be involved in cannabis events in the future.

Gryzwana is still excited about every step of growth Better Daze achieves.

“A few months ago, it was the first time we quit all of our other jobs,” Gryzwana said. “It’s our mini dream come true.”

CASSOPOLIS — After having to cancel in 2020 due to the COVID-19 pandemic, one of Cass County’s most beloved annual... read more