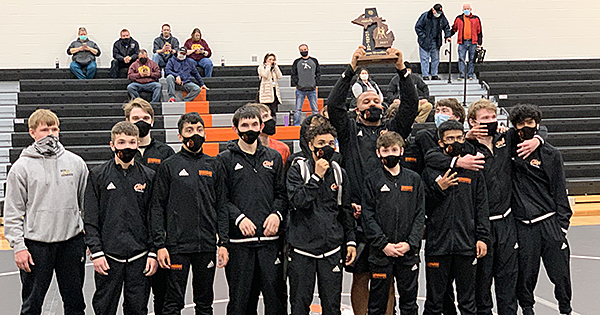 With all of the unknowns of trying to complete a season under every-changing guidelines due to a world-wide pandemic, one thing seems to be a sure thing. Dowagiac will bring home the Division 3 district championship.

Dowagiac defeated visiting Brandywine 54-30 in the championship match after the Bobcats had knocked off Berrien Springs 54-24 in the semifinals.

The three-time defending district champion Chieftains have weathered the COVID storm like everyone else. And, like everyone else, it has felt the direct effects of the pandemic. Thursday night was no different as several starters were unable to compete due to quarantine.

Dowagiac was not the only team feeling the effects. Buchanan had to end its season on Monday. It was supposed to be the Chieftains’ semifinal opponent.

Brandywine had to give up too many points due to forfeits to upset Dowagiac for the title. The Bobcats had wrestlers out for a variety of reasons, including COVID and injuries.

For veteran Dowagiac Coach Colin Burandt, it was nice to see his team put in a workman-like effort.

“Overall, we performed well,” he said.

“Again, it comes down to staying off our backs, which we still have a little bit of improving to do on that. It is nice to get the four in a row. It has been done a couple of times in school history. We are looking to continue our streak at regionals, wherever they may be.”

Dowagiac’s veteran wrestlers all performed well, but it was a newcomer who help seal the deal against the Bobcats.

Braqsten Whitaker, who had never wrestled a varsity match before Thursday night, not only got a win for the Chieftains at 171 pounds, where he was filling in for senior Deny White, but pinned Brandywine’s Jesse Marlin in 2:48.

Brandywine coach Rex Pomranka was proud of his squad’s effort against the Chieftains. The young Bobcats have a bright future as they have just two seniors.

“Things had to go perfect,” he said. “Some things did. Somethings didn’t. Like I told the kids, the whole year it has been the same story. Kids didn’t come out, Kids got COVID. It is hard to win when you are giving up 20 to 30 points.”

EDWARDSBURG — For the second time in three years, the Edwardsburg wrestling team captured the Division 2 district championship. The... read more