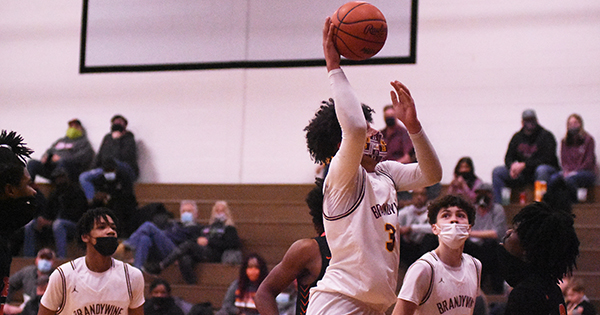 BUCHANAN — In the first half of its first game in more than a week, Brandywine played like a boys basketball team with a layer of rust due to a pandemic that has limited both game and practice time.

However, after trading baskets with rival Buchanan early, the Bobcats pulled away in the second half to earn a 53-37 win Tuesday night. The win gives Brandywine the regular-season sweep against Buchanan after defeating the Bucks 61-51 on Feb. 19.

“It was a good win tonight,” said head coach Nate Knapp. “We had the whole week off due to COVID stuff and weren’t able to do a lot of things, but the kids weathered the storm. Buchanan controlled the tempo and took us out of our comfort zone early, but we found a way to come out on top.”

The Bobcats entered halftime nursing a 21-19 lead and outscored the Bucks 32-18 in the second half. Buchanan’s Logan Carson scored 12 first-half points, but was limited to just four points the rest of the way. Gavin Fazi scored 10, and McCoy west added nine.

“The kids were trying to play up-tempo,” Knapp said. “When they slow things down, sometimes you have to be able to slow things down and be smart. We have to be patient. The kids did a better job defensively in the second half. We didn’t get the trap. We just played our defense and found ourselves with good matchups on offense. It was a great team win.”

Brandywine finishes the regular season with an 8-2 record and will spend the rest of the week preparing to face the winner of Tuesday’s Division 3 district matchup between Marcellus and Bridgman at 7 p.m. Thursday at Bridgman.

“We know what we have to do,” Knapp said. “This part of the year is more mental than physical. Had some careless turnovers tonight, but we also had a week off, so we’ll get some shots up and shore up some things to make sure we’re ready.”

BERRIEN COUNTY – COVID-19 vaccine eligibility in Berrien County will be changing on Monday to include residents 16 years of... read more