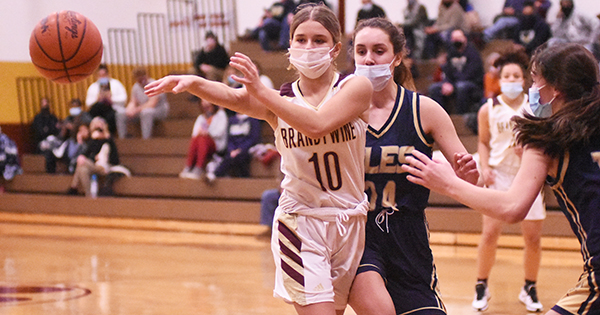 The Eddies rolled to a 62-13 victory over a short-handed Chieftains squad, which was forced to bring up its JV team due to illness and injuries.

Edwardsburg (4-1, 4-0 Wolverine Conference) remained a game behind league-leading Plainwell with its win over Dowagiac, which was decided after just one quarter of play.

The Eddies outscored the Chieftains 23-3. Edwardsburg led 43-9 at halftime and 53-11 heading into the fourth quarter.

The Eddies are set to host Otsego in another Wolverine Conference contest on Saturday. Tipoff is set for 1 p.m.

Dowagiac will host Sturgis in a Wolverine Conference matchup on Monday. The game is scheduled to begin at 7:15 p.m.

The Bobcats were able to hold off a second-half charge by the Indians to improve to 4-2 on the season.

Brandywine dominated the first half, leading 16-7 after one quarter and 30-18 at halftime.

Hartford (4-2) outscored the Bobcats 12-6 in the third quarter to cut the Brandywine advantage to 36-30.

The two teams were nearly even in the fourth quarter, with Brandywine holding a one-point advantage on the scoreboard to pull out the victory.

Hartford was led by Khashya McCoy’s 18 points, which tied Knapp for game-high honors. Alexis Snodgrass finished with 10 points for the Indians.

The Bobcats hit the road Friday night for a BCS Athletic Conference Red Division contest at South Haven. The game is scheduled to begin at 5:30 p.m.

LANSING — The Department of State will enable new online services for customers and expand the capability of self-service stations... read more