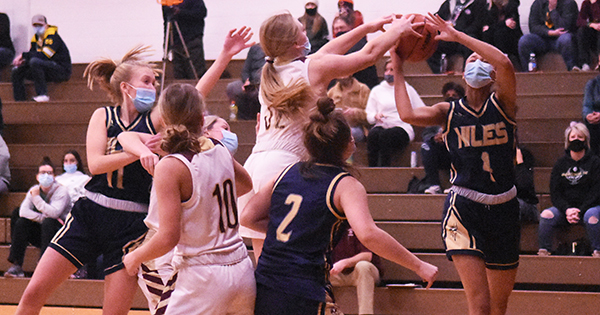 Niles and Brandywine battled for every loose ball and rebound Friday night. The Vikings held on to beat the Bobcats 53-47. (Leader photo/SCOTT NOVAK)

Vikings hold on for win over crosstown rival Brandywine

NILES — Two teams trying to figure out their identities after losing top players to graduation met on the court at Brandywine High School Friday night.

This was anything but a regular girls high school basketball game because it featured crosstown rivals Niles and the host Bobcats.

The Vikings entered the contest the more experienced team, and used that to their advantage in the first three quarters. Brandywine, which already had a game under its belt, used that experience to make a run at Niles before falling 53-47.

The Vikings’ experienced players made enough plays to keep the youthful Bobcats at bay down the stretch. Both teams came away from the game, having learned valuable lessons that can be used down the road.

“You cannot go through spurts like we did in the first half where we looked like deer in the headlights,” said Brandywine Coach Josh Hood. “It was really fun to watch them grow up right before your eyes in the second half. What they don’t understand is we get so excited at the offensive end, but that is now what this program is built on. this program is built on getting excited about defense. Right now, outside of Alysa Adamczyk, there is not a lot of excitement on the defensive end.”

Both teams showed their nerves in the opening quarter as they struggled even to get shots up.

Niles was able to take a 7-5 lead into the second quarter, where it found its footing. The Vikings pour in 19 points, while holding the Bobcats to nine points, which resulted in them having a 26-14 advantage at the half.

Niles was again the aggressor in the third quarter. The Vikings increased its advantage to 15 points (41-26), heading into the final eight minutes of the contest.

That is when Niles hit the wall. Playing in their first game with limited practice time, the Vikings seemed to get worn down by the Brandywine pressure, both mentally and physically, according to Niles Coach Jessica Johnson.

“They started getting tired and were not mentally in the game even,” she said. “Brandywine started attacking us more, and we were having trouble stopping the ball.”

It was the only quarter that the Bobcats would outscore the Vikings as Brandywine had a 13-11 advantage. But when push came to shove, Niles’ experience came through and saved the day.

“I really look for the girls who are returning to step up in those situations,” Johnson said. “They really do it on defense. We just need to get the offense going.”

One of those veteran players, junior Amara Palmer, scored a game-high 23 points before fouling out. Niles also got 12 points from junior Kamryn Patterson.