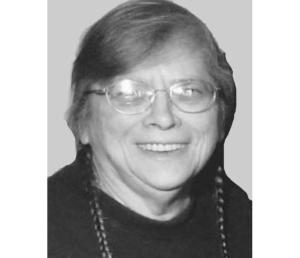 Peggy Anna Herold, 75, of Dowagiac, passed away Thursday, Feb. 4, 2021, at her home following an extended illness.

Peggy was born Sept. 23, 1945, to George and Jeanette (Latislaw) Bartosch at Indian Lake, Dowagiac. She graduated from Dowagiac Union High School in 1964. On June 27, 1970, she married the love of her life, Bernard “Skip” Herold Jr., in Dowagiac. In Peggy’s younger years, she was active in many sports, including softball and bowling. While with her husband, who was stationed on Guam during the Vietnam War, her softball team won the Military Woman’s Softball League Championship for three consecutive seasons. While there, she was Manager of the NCS Finegayan Enlisted Men’s Club.

She also was involved in many activities in the community. Peggy was a member of the Dowagiac Conservation Club and had served on its Board of Directors, was a Hunter Education Instructor and an Assistant Coach on the Club’s Scholastic Clay Trap Shooting Program. She also managed the popular Friday Night Fish Fries for several years. Peggy served a number of terms as President of the Indian Lake Volunteer Fire Department Auxiliary. She had been the cashier at the Fire Department’s Pancake Breakfasts and welcomed everyone with her lovely smile for more than 25 years.

Peggy had been employed by James Heddon’s Sons, Totem Fruit Market, and was Produce Manager for Wicks’ Apple House where she was affectionately known as the “nicest lady with the long braids”.

She enjoyed trips with the Capital City Corvette Club. She loved hunting, fishing, being outdoors and especially traveling “Up North” to their cabin. Most of all, she loved her family and will be greatly missed.

Peggy is survived by her loving husband; sons, Bernard “Skip” Herold III and Douglas Herold; siblings, Sandra Bechtel, James (Theresa) Bartosch and Karen Bartosch; and numerous nieces, nephews, and cousins. She was preceded in death by her parents.

Arrangements are entrusted to Clark Chapel of Dowagiac. A private service will be held on Friday, Feb. 12, 2021. Burial will take place at Indian Lake Cemetery. A celebration of life memorial service will be held at a later date. Memorial contributions in Peggy’s name may be made to the Dowagiac Conservation Club, Indian Lake Volunteer Fire Department, or The Alzheimer’s Association. Those wishing to share a memory of Peggy online may do so at clarkch.com.