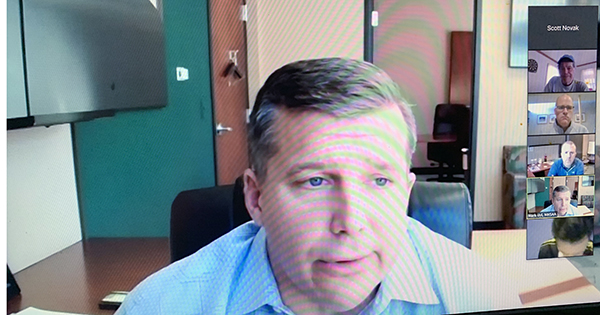 MHSAA Executive Director Mark Uyl updated the media via Zoom on Friday about winter sports. The state is still waiting on the MDHSS to allow contact sports. (Leader photo/SCOTT NOVAK)

Uyl updates media, but no date yet for restarting winter sports

Uly met with members of the media via Zoom Friday morning to give an update on where things stood as far as getting the four contact sports — boys and girls basketball, wrestling and hockey — started. Currently, under orders from the Michigan Department of Health and Human Services, those sports are on hold until Feb 21.

The MHSAA is facing its second extension from the MDHSS and the governor’s office. Michigan took what was supposed to be a three-week pause on Nov. 15 when winter sports teams were starting up their preseason practices. Just prior to the Dec. 8 expiration of those orders, the state extended no contact orders for high school sports until the end of January.

Then, on Jan. 22, the governor’s office announced that contact sports would not be allowed to begin on Feb. 1 as it originally said, but extended it until Feb. 21, putting in jeopardy the entire winter sports season other than bowling, swimming and diving.

Uly said on Friday morning that a change at the MDHSS has been a positive step toward restarting the winter sports seasons, but by no means does he have the answers as to when that may happen.

On the same day that Gov. Gretchen Whitmer was announcing that the state was extending the orders to Feb. 21, the director of the MDHSS, Robert Gordon, resigned.

Whitmer announced that Elizabeth Hertel would replace Gordon in that position.

Uyl said that the change in leadership has been a positive one.

“Really going back to November, we have worked to get information and data to the decision makers who have really been the office of the governor, as well as, the Michigan Department of Health and Human Services,” Uyl said. “The two most pressing questions that every person connected to school sports has had now, really going back to mid-November has been are ‘what are the numbers currently preventing us from playing?’ And the corollary question to that is, ‘what do the numbers have to look like for us to play?’”

Uly said that it was obvious in mid-November with the surging numbers that the state needed to take a pause to help get them back under control. Now that the numbers have improved, the question is how much lower do they need to be in order to have contact winter sports?

“You now fast forward a little more than two and a half month later, our number of state-wide new cases is a third of what they were back in mid-November. The positive test rate is now half of what it was then. So, it does beg the question right now — given those great improvements in the metrics — what are the metrics being used specifically when it comes to school sports? Those are the two questions we continue to push every day.”

Uyl added that every time the state has given the go-ahead to begin play, the state has been ready. He said the state is currently ready to start the remaining winter sports seasons once the state says it can.

Uyl also pointed out the numbers from the pilot rapid testing program, which proved to be highly successful.

Of the 5,376 individuals (athletes, coaches, team personnel, cheerleaders, ect.) that were tested, only 57, or one percent, tested positive at some point in the process. Of the nearly 30,000 rapid antigen tests that were given, 99.8 percent came back negative.

He also noted that, as of Monday, 38 states, including Indiana, Ohio and Wisconsin, had begun winter sports competition.

“One percent of those tests had a positive test in the three and a half weeks of the program,” he said. “We are going to get one final update from MDHSS, but the last report was right around 30,000 rapid tests had been completed and recorded, and that negativity percentage was 99.8 percent. We thought the numbers would be good. They were extraordinarily good.”

EDWARDSBURG — Evidence of Edwardsburg Intermediate School’s dedication to excellence and student success is easy to see when walking through... read more