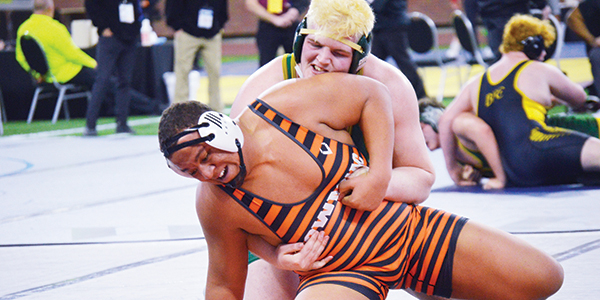 Wrestlers are hoping that there season can be saved by the MHSAA. (Leader file photo)

NILES — Never give up, never give in seems to be the motto of the Michigan High School Athletic Association’s Representative Council.

The council reaffirmed that winter sports will be played when the Michigan Department of Health and Human Services allows boys and girls basketball, competitive cheer, hockey and wrestling to begin competition at a meeting Wednesday.

Currently, the MDHHS is allowing boys and girls bowling, along with boys swimming and diving to host competitions, while the remaining five “contact” sports can have non-contact practices, but no competition until after Feb. 21.

“Each week, we see hundreds of examples of children and families competing in non-school competition, both in-state and out-of-state,” said MHSAA Executive Director Mark Uyl. “This not only is in violation of current MDHHS orders, but sending all of these families into different states will only become an impediment to getting students back in school fulltime, but we can contribute to students returning to in-person learning by allowing MHSAA member schools to begin full activities, participating locally and against more local competition, and under the guidance of trained, professional educators.”

The MHSAA finally concluded its fall sports season last weekend with the 11-player state football finals at Ford Field in Detroit. Earlier this month, volleyball and girls swimming and diving wrapped up their seasons. All three sports were allowed to finish by taking part in the MDHHS pilot rapid testing program.

Results from that program proved to be positive.

Of the 5,376 individuals (athletes, coaches, team personnel, cheerleaders, ect.) that were tested, only 57, or one percent, tested positive at some point in the process. Of the nearly 30,000 rapid antigen tests that were given, 99.8 percent came back negative.

In its plea to the MDHHS and Gov. Gretchen Whitmer, the MHSAA shared those numbers and pointed out that as of Monday, 38 states, including Indiana, Ohio and Wisconsin, had begun winter sports competition.

NILES — As the Michigan Department of Health and Human Services and Gov. Gretchen Whitmer’s office continue to extend the... read more