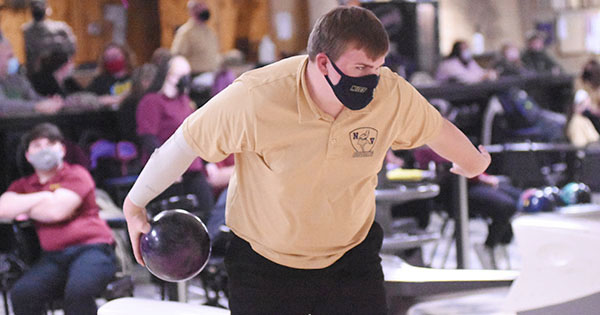 NILES — After several delays and a week’s worth of practice, the Niles and Brandywine boys and girls bowling teams opened their season at Joey Armadillo’s Monday afternoon.

A season that was supposed to start in December, but was delayed by the COVID-19 pandemic, finally got the go-ahead from the Michigan Athletic Association to begin competition this week.

Just before the winter sports teams were scheduled to begin practices in late December, the Michigan Department of Health and Human Services, along with the governor’s office, put the state on hold, which included all high school sports. That delay was only supposed to be for three weeks, but was extended into January.

The MDHHS and Gov. Gretchen Whitmer relaxed some of the guidelines in mid-January, which included allowing bowling and swimming, and diving to begin competition this week.

Brandywine Coach Pepper Miller and Niles Coach Jim Jaynes were happy to hear the sounds of balls rolling down the alleys and striking pins.

The two teams are back in action Wednesday, with Brandywine being the host team at Joey Armadillo’s.

“It was great to actually start our season,” Jaynes said. “Lots small challenges, especially starting in a new conference this season. The biggest challenge is the unknown of ‘will an athlete end up tomorrow under quarantine?’ So, we will continue to make as many adjustments needed to improve and get prepared for regionals.”

Miller did not know what to expect, but was pleased with the fact that the teams got their seasons started.

“Finally,” she said. “It was great to get back to a little normalcy today. The kids were excited and nervous to start the season, but after they got going, the kids said it felt good to bowl again. We had to make a few changes to keep social distancing and fewer spectators watching due to COVID restrictions, but at least we get to bowl.”

The Bobcats were led by Garrett Stoneburner’s 359 series, which included a 220 game. Landon Millin rolled a 325 series, including a 153 game.

NILES – Confusion over population numbers and COVID-19 cases bubbled up on social media last week, as an article made... read more