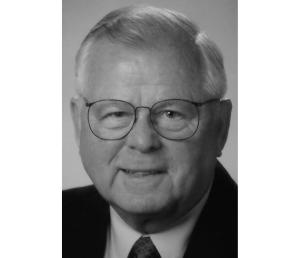 Charles Joseph LaSata, 98, of Niles, husband, father, grandfather, veteran and lawyer for all, died peacefully at home on Friday, Jan. 1, 2021 with his wife Julia and three children gathered at his side. His family is grateful for the kind and compassionate care provided by “The Ladies” and by the staff of Caring Circle Hospice at Home.

He was born on Oct. 25, 1922, in Scranton, Pennsylvania to Karol and Magdalene (Jacevicius) LaSata and graduated from Scranton Technical High School. Like his two brothers, he volunteered to serve in World War II, entering the U.S. Navy where he was stationed on the USS Burke escorting convoys across the North Sea and was honorably discharged in 1945. He earned his bachelor’s degree from Penn State University where he was a star baseball pitcher. He then earned his law degree from The Catholic University of America in Washington, D.C. After gaining admission to the District of Columbia bar, he worked for the U.S. government in Philadelphia handling contracts and munitions procurement for the Korean War effort. He was transferred to South Bend in the mid-1950s to oversee government contracts and munitions at Bendix Corporation. There he met Julia Durm who was a nurse at a local hospital. They married at Saint Mary’s Church in Niles on June 3, 1961, and enjoyed more than 60 years together. He later became director of legal aid in South Bend. In 1966, Charlie was appointed by Michigan Attorney General Frank Kelly as a special assistant attorney general and he served in that position until 1981.

He enjoyed vegetable gardening in the backyard, summers at the family cabin near Saint Ignace, Michigan, 48 years of winters on Sanibel Island, Florida, and annual deer hunting trips with friends, near Seney, in the Upper Peninsula. His greatest joy was his family.

He was sadly preceded in death by an infant son, Thomas Karol LaSata; and by his parents, Karol and Magdalene LaSata, both of Scranton; his brother, Joseph LaSata, of Hartford Connecticut, John LaSata, of Scranton; and his sisters, Nellie Sobol, Ann Gargan and Mary Janosy, all of Scranton.

The Mass of Christian Burial for Charles LaSata will be celebrated at 11 a.m. on Thursday, Jan. 7, 2021, at Saint Mary Catholic Church, 207 S. Lincoln St. in Niles by the Rev. Christian Johnston assisted by Deacon Roger Gregorski. Committal Rites will follow at Calvary Cemetery in Niles, and will conclude with Full Military Honors by the U.S. Navy Honor Guard and American Legion Post #51 of Buchanan. Attendance will be limited, masks required, and social distancing practiced. Others may witness the events via the livestreamed broadcast on the Halbritter-Wickens Facebook page: facebook.com/halbritterwickensfuneralservices.

The family will receive relatives and friends from 4 until 6 p.m. on Wednesday at Saint Joseph’s Altar in Saint Mary’s with recitation of The Rosary at 5:30 p.m. Attendance will be limited, masks required, and social distancing practiced. Contributions in memory of Charlie may be made to the Saint Mary Parish Christian Service Center, 219 South State Street, Niles, Michigan, 49120, stmarysniles.org; or to the Caring Circle Hospice at Home, 4025 Health Park Lane, Saint Joseph, Michigan, 49085, spectrumhealthlakeland.org/caring-circle/programs/hospice-at-home-cares. Arrangements were made at the Halbritter-Wickens Funeral Home, 615 E. Main St. in Niles. Online condolences may be left at: halbritterwickens.com.

Charles’ parents arrived in the United States from Lithuania and worked hard for their successes. He remembered that and was always ready to serve his struggling friends as well as everyone else, striving “to act justly, love mercy, and walk humbly with his God”, a standard which he was proud to pass on to his children and grandchildren.