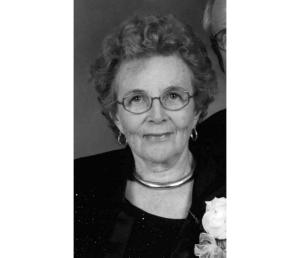 Lois Ann Stamp, 89, of Vandalia, died peacefully Monday morning, Dec. 21, 2020, in her home, just 13 days after the passing of her beloved husband, Roger.

Her life began June 14, 1931, in Three Rivers, Michigan, the older of two children born to Malcom and Beatrice (Noecker) Parsons. Lois graduated from Constantine High School in 1948. She married Roger Hilton Stamp Dec. 31, 1948, in Jones, Michigan. After almost 72 years of marriage he preceded her in death Dec. 8, 2020.

Lois became a school teacher, and taught only in one room schoolhouses in the 1950s. For decades after, she managed the business of the farm she and her husband owned. In addition to the things she did to support her children during their school years, she excelled at playing bridge and played in the Cassopolis golf league. At her urging, she and her husband traveled the world.

Lois and Roger will be remembered in a combined private family ceremony in East Union Cemetery in Porter Township where Roger will be accorded full Military Honors.

The family prefers contributions in memory of Lois be made to any Veterans Service Organization of the donor’s choice.