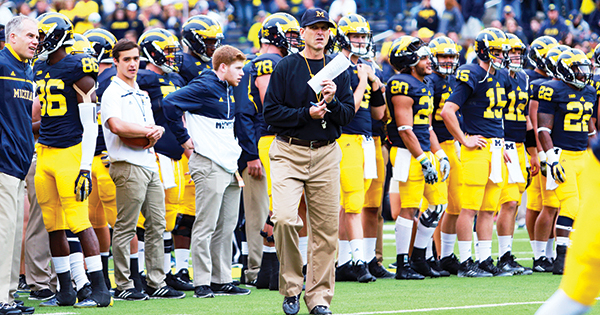 Michigan will have to make a decision about whether or not to keep Jim Harbaugh as its football coach soon. He is about the enter the final year of his contract. (Leader file photo)

COLUMN: Michigan must make another change

As I scrolled through my social media news feeds, looking to see what is going on in the state of Michigan and the country as far as sports are concerned, I ran across an article about Jim Harbaugh saying he wants to remain Michigan’s football coach.

I just had to click on the link to read more. My main reason is to see if Harbaugh had any rationale for why the University of Michigan should keep him as its head coach. After all, to say his tenure in Ann Arbor has been a bust might be a bit understated.

The Wolverines, who came into the COVID-shortened Big Ten season with high expectations, will head into Saturday’s finale with a 2-4 record. Michigan was unable to play arch rival Ohio State last Saturday due to issues with COVID-19, making it the first time in 102 years that the Wolverines and Buckeyes have not met on the gridiron.

That cancellation saved Harbaugh and the Wolverines from another embarrassing loss to Ohio State, a loss that would have left him with an 0-6 mark against the Buckeyes. In Michigan circles, that is far from good enough. Even if the Wolverines were beating up on everyone else, including top-ranked teams, a winless record against the Buckeyes usually gets a coach sent packing. The same is true at Ohio State if you cannot beat “that team up North.”

Heck, John Cooper would go basically 9-2 every season in Columbus, Ohio, but since one of those two losses was usually to the Wolverines, he was fired. You have to beat your arch rival or hit the road. In what I and many consider the greatest rivalry in college football, that is just how it goes.

I have said this in past columns and many conversations recently with football fans, I never expected Jim Harbaugh to fail at Michigan — not even close. When the university announced the hiring, I thought the Wolverines would vault back to the top of the college football mountain, a place it has spent much of its history.

In fact, Michigan remains No. 1 in total victories with 962. Ohio State stands second with 924, while Alabama, Texas and Yale are tied for third with 916. Notre Dame comes in tied for sixth with Oklahoma at 908.

But over the past decade, Michigan has been anything but the best team in college football. Since the departure of Lloyd Carr in 2007, Michigan coaches Rich Rodriguez, Brady Hoke and Harbaugh are a combined 95-63. That might be good enough at some schools, but it is not good enough in Ann Arbor.

Game statistics aside, you also have to look at the fact that is set to make $8 million next season, the last year of his six-year deal. Michigan’s coaching staff, based on 2019 salaries, was the first major college football program to have three assistants making at least $1 million. Are the Wolverines getting enough bang for their bucks?

I certainly do not think so.

The real problem facing the University of Michigan is who would replace Harbaugh and could turn the team into a top-tier program, the same way Brian Kelly did at Notre Dame? The short answer is who knows. In my mind, Rodriguez was a failed experiment to bring the Wolverines out of the Bo Schembechler era and into the modern days of college football. Hoke was supposed to right the ship with great recruiting. He did land a lot of great recruits, but those recruits never excelled.

Harbaugh was the one. The one to bridge the Schembechler days with the way college football is played now. He was a quarterback whisperer who would be able to beat the Buckeyes and in-state rival Michigan State. It just has not worked out the way everyone planned.

Now, with one year left on his contract, and the Detroit Lions searching for yet another new coach, who knows if Harbaugh jumps back to the National Football League where he enjoyed success with the San Francisco 49ers.

Perhaps Wednesday will be a telling sign for the administration at the University of Michigan. The early signing period begins for recruiting and Michigan had the No. 9-ranked class heading into it. Should players start deciding they would rather play somewhere else, then it could force their hand and make them think about going in a new direction.

I wish I had a crystal ball and could see into the future. I would like to be able to predict if there is a coach out there that could return the Wolverines as one of the elite teams in the nation. But alas, I do not. So, we will all have to wait and see what the future holds. Starting Wednesday with the signing of recruits, and then on Saturday when Michigan wraps up its season against Iowa.

BUCHANAN – Buchanan City Commissioners are putting the brakes on a proposed new recreational marijuana business in the city. The... read more