Rev. Louis H. Ketchum Sr., 77, of Niles, passed away Sunday, Dec. 6, 2020, at Lakeland Hospital in St. Joseph.
He was born to the late Howard W. Sr. and Wanda J. (Forgue) Ketchum on Aug. 17, 1943, in Buchanan.
Louie went off to boot camp in 1964 after graduating from Buchanan High School and upon completion of boot camp he became an accomplished soldier serving during the Vietnam War from 1964-1967. Louie was a decorated Marine receiving his Expert Badge on the M-14 Rifle, Sharpshooter medal with the .45 Caliber pistol, National Defense Service Medal, the republic of Vietnam Commendation Medal, The Vietnam Service Medal, the Good Conduct Medal and reaching the rank of Sergeant (E-5) Upon completing his active service duty, he came back home to Berrien County where he began working as a welder. 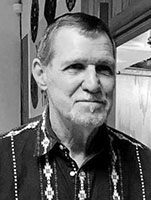 Louie was a man of varied talents and hobbies. He was a talented artist and spent time sketching and painting as well as photographing the great outdoors. He took his service to his country very seriously and even after being discharged from the Marine Corps he continued to serve military men and women counseling them and praying with them. He was a proud member of the AMVET riders who proudly travelled in processions to take their fallen comrades to their final resting place; he was also a member of the American Legion Post 51 in Buchanan. He also enjoyed line dancing and was an instructor at Crumstown Conservation Club and the AMVETS Post 1978. He was a member of Amarillo Star Chapter 2 Line Dancing, and a lifetime member of Crumstown Conservation Club. In keeping with his desire to serve, he also was minister for many years.
He was preceded in death by his parents; and two siblings, Howard Ketchum Jr. and Stephanie Ketchum.
Louie is survived by children Louis (Karen) Ketchum Jr., of Yellville, Joseph Ketchum also of Yellville, Arkansas, Thanh (Erica) Ketchum, of Valley Springs, Arkansas and Tina (Ryan) Unger, of Manvel, Texas. He will also be missed by his ten grandchildren; six great-grandchildren; and his siblings, Robin (Rich) Hojara, Norman (Pat) Ketchum, Jimmie (Tasha) Ketchum, Cerese Ketchum, Kristine (Russ) Hossler, Bridgette Ketchum, Tracie Edquist and Brian (Mendy) Ketchum. He will also be missed by a host of nieces and nephews.
A time of visitation for Louie will take place from 6 to 8 p.m. on Monday, Dec. 14, 2020, at Brown Funeral Home, in Niles. Services to celebrate Louie’s life will take place at 10 a.m. on Tuesday, Dec. 15, 2020, at Brown Funeral Home. Full Military Honors will be performed by the U. S. Marine Corps as well as American Legion Post 51.
Those wishing to make a memorial donation in honor of Louie have asked that you would consider the Niles Chapter of AMVets, 1117 E Bertrand Rd., Niles, MI 49120.
Because of the COVID-19 virus, the state of Michigan requires all in attendance to follow all guidelines including, social distancing, mandatory mask and sanitizing. We appreciate your assistance in helping us to keep everyone healthy in attendance.
Photos, condolences, and memories can be left for Louie’s family at BrownFuneralHome.com.
Arrangements have been entrusted to Brown Funeral Home, Niles.