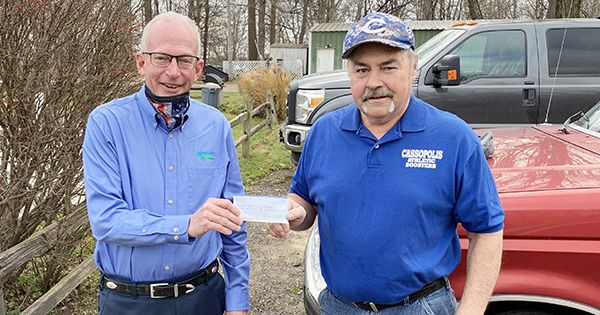 The summer of 2020 was a challenge for schools, who which raise funds to help out their athletic programs, band and choir students.

Due to the state of Michigan limiting the number of people who could gather at indoor or outdoor events, many of those booster clubs were forced to cancel their plans for this summer.

Cassopolis graduate Bill Loux, who is the club manager at Diamond Lake Golf Club in Cassopolis, came up with a unique idea to raise money for the Cassopolis Sports Athletic Boosters, which has grown into an even bigger plan.

Diamond Lake hosted scrambles on Friday evenings throughout the summer that helped raise money for the booster club. Steve Wells, the head professional at Hampshire Country Club, has joined forces with Loux in an effort to support not only the Cassopolis Athletic Boosters, but help restart the Rangers’ golf program, which has struggled to field a team in recent years.

Between the two, the booster club received $1,000 on Monday.

“People would make a donation on the side and we would then forward that on to the boosters,” Loux said about how the scrambles worked. “Steve Wells came to me a week or so ago and said he just wanted to make a donation to the boosters. I played in a couple of the events, so I just wanted to give you some money. We matched that hear at Diamond as well.”

Loux added that he and Wells specifically want to help the golf program.

“We want to make this Cassopolis golf program one of the best in the state of Michigan,” he said. “Steve and I both think we have the facilities, we can help with instruction, and we can help with funding. We are both very blessed, and these two local golf courses want to help the program.”

Loux said that golf has been good to both he and Wells, and that both played on some very good golf teams.

“We want to rejuvenate that,” he said.

Loux added that he has seen more kids playing out at Diamond Lake this year and in the past eight years.

“What I have a burning desire to do, is to get those kids out here and be more active, and to have a really great golf program for them and for the community,” he said. “There are a lot of great things happening in the community, and we want to help this way. There is a great group of people in the boosters who are always behind the scenes trying to get things for kids.”

While Diamond Lake is the Rangers’ home course, Loux said that Wells and Hampshire Country Club have allowed Cassopolis players to come there and to shoot a round of golf for a reduced cost.

“They have been doing that for years,” Loux said.

The fundraising will not stop now that golf is heading into hibernation for the winter.

Loux said that he plans to get Wausau Homes of Cassopolis involved too, and the goal for the coming year is $2,000.

“Our goal would be to earmark maybe half of that money that would just go to the golf program,” he said. “They really have fallen backward and we really want to inject some money into that program. That would be our minimum goal is to raise $2,000 for sports.”

COLUMN: As students return to sports, sportsmanship and respect must be emphasized

Every now and then, an event occurs that serves as a wake-up call and reminds us that we have some... read more