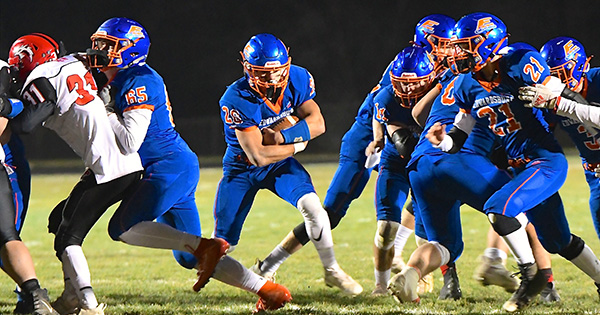 The MHSAA is hoping to restart the fall sports season with practices on Dec. 9. The state announced its plans to complete the fall sports tournaments Wednesday afternoon. (Leader photo/KELLY SWEENEY)

Now it is up to the numbers and the state of Michigan to decide if the plan can be implemented.

Michigan is currently in its first days of a three-week “pause” ordered by the governor’s office and the Michigan Department of Health and Human Services to try and regain control of the COVID-19 pandemic numbers that have spiked in recent weeks.

The council approved plans to resume the state’s swimming and diving finals, volleyball semifinals and finals, and restarting the 8- and 11-man football playoffs that have two and three weeks remaining, respectively.

The earliest those teams could resume practice is Dec. 9, if the state does not extend its current guidelines.

The MHSAA would complete the volleyball state tournament by having the quarterfinals played in all four divisions on Tuesday, Dec. 15, with the semifinals being played Dec. 17 and 18, and the final on Dec. 19 at the Kellogg Arena in Battle Creek. Kellogg is the originally scheduled site for the semifinals and finals.

The swimming and diving finals for boys in all three divisions would be Tuesday, Dec. 22 (diving) and Wednesday, Dec. 23 (swimming). Each division would be contested at a different high school.

“We understand where COVID numbers were trending, and that’s why we have been supportive of the order to pause,” said MHSAA Executive Director Mark Uyl. “But these fall sports deserve closure, and this strategy provides the best opportunities without further interruptions to a normal course of training and competition. A very small percentage of our teams remain active in our fall tournaments, also limiting potential exposure to the virus across the state. Meanwhile, by waiting until January to begin winter competition, the council is allowing our teams to continue activity but also restricting the mixing of communities to further promote reducing COVID spread.”

Area athletic directors reacted to the schedule, hoping that it can be implemented and the state can avoid what happened in March when the winter sports season was not concluded. Eventually, spring sports were canceled altogether.

The news was most important to Edwardsburg Athletic Director Kevin Dean, whose volleyball team is in the quarterfinals and football team is in search of another state championship.

“First off, with both volleyball and football still playing in the tournament, I am hopeful that the three-week pause isn’t extended and that our teams get the chance to complete their seasons on the field and court,” he said. “I appreciate the way that both coach [Kevin] Bartz and coach [Nikki] Bush have handled this uncertainty, and know that they both will have their teams ready to compete. I also applaud the MHSAA for everything they have done to allow us to compete this fall and also their commitment to completing the season.”

The remaining teams in the Leader Publications coverage area have already completed their fall sports season seasons. They are hopeful that the restart date of Dec. 9 holds so that they can begin the winter sports season in early January.

“As of now, it looks like we will practice starting Dec. 9, and begin competitions after Jan. 4,” said Buchanan Athletic Director Mark Frey. “We will adjust as we did in the fall, and we are hopeful that the winter season will occur. We understand that this season could look very different, much like the fall, but it is clear that the MHSAA wants our athletes to play, so we will be flexible to help make this season happen.”

At Cassopolis, where first-year Athletic Director Chad Gardner had more than his share of battles with COVID-19, including the volleyball team having to forfeit is district semifinal match, is looking forward to getting back on track.

“After reading the update from the MHSAA, I would say they’re being cautiously optimistic about completing the fall season and having the finals for volleyball, swim and dive, and football,” he said. “While looking forward to the winter sports allowing practice to resume on Dec. 9, and competition to begin on Jan. 4, this is a sound plan if the COVID numbers are declining at this point. As MHSAA stated, it is all dependent on the state of Michigan and the health department to deem it safe to return to competition at this point.

“I feel if the number of COVID cases are declining it should be safe to return to play as long as all the protocols are followed, not only by the athletes, but the spectators as well. This is a very real virus and needs to be treated as such.”

Veteran Brandywine Athletic Director Vance Stratton knows the state is doing its best to get some closure for the fall sports athletes.

“I believe the MHSAA is doing everything they possibly can to have closure for the fall sports programs,” he said. “While not ideal, what is proposed is better than just ending everything. The kids are going to have the opportunity to finish their seasons unlike what happened last winter when seasons were simply shut down and never had that opportunity.”