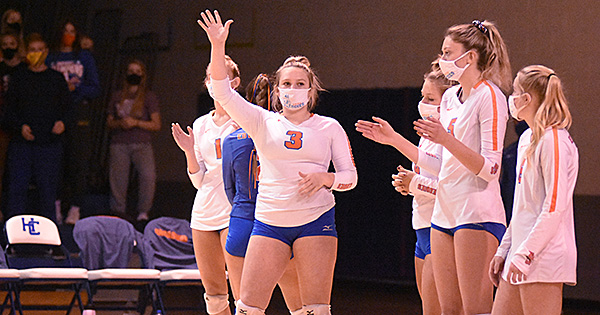 Edwardsburg was supposed to be playing in the Division 2 state quarterfinals today. However, the MHSAA shut down all sports until Dec. 8 to help fight the spread of COVID-19. (Leader file photo)

Edwardsburg coaches react to playoffs being put on hold

EDWARDSBURG — The playoff runs of the Edwardsburg volleyball and football teams were going well until Sunday night.

That is when the state of Michigan announced it was rolling back its reopening to Phase 2, followed a short time later by the Michigan High School Athletic Association announcing it was suspending the remaining fall sports postseason, and the beginning of winter sports practices, until at least Dec. 8.

Neither of those events will happen until the state is able to resume the postseason. A schedule for resuming them will be finalized and made public when the MHSAA’s Representative Council meets Wednesday morning.

Edwardsburg volleyball coach Nikki Bush and her team were disappointed to hear the news. After all, the Eddies earned a spot in the quarterfinals for the first time in 28 years last week when they swept Hamilton and Battle Creek Harper Creek to win the Division 2 Regional championship.

“Well it definitely wasn’t the news we wanted to hear,” Bush said. “We were on pins and needles all season, knowing that our season could be ended at any point, but it was a harder pill to swallow when it happened after such big accomplishments from our team.”

Bush said her team was together and listened to Whitmer’s press conference.

“Her statement at least allowed us to continue through Tuesday, so we finished up practice in hopes to get at least Tuesday’s practice in,” she said. “At the end of practice, we received the news that MHSAA decided to halt us immediately. There was definite disappointment and frustration from our team.”

“Wow, how quickly things change,” he said. “We were thrilled when we got the opportunity to re-start football in September, and we are frustrated now that we may not get a chance to finish. Our coaches and players understand that the number of COVID cases is increasing and that steps need to be taken to lessen the impact on our hospitals and to save lives. We will follow the guidelines set by the governor and would encourage others to do the same. Our players just want the opportunity to finish the season, to see what goals they can still accomplish, to see how their story of the season will end. Win or lose, they just want closure, to not have to look back and say ‘If we only had the chance, we could have.’”

Bartz said his staff and his team will work to remain in shape and focused so that when the time comes, they can get back on the field and finish what they started.

“As a program, we will proceed with the guidelines presented by the MHSAA, which at this time is no face-to-face contact between players and coaches, only virtual meetings, until Dec. 9,” he said. “That puts the responsibility on the players to keep themselves physically in shape as well as maintaining a positive mental attitude and an internal drive, to be prepared, if we can continue in three weeks. As the date to restart gets closer and the MHSAA rolls out their plans for completing the season, we will run Zoom meetings to lay out our game plan for Grand Rapids South Christian.”

Bartz knows that his team is ready to face yet another obstacle. He hopes it is the final one of the 2020 season.

“Our players are resilient and this is another test of their character,” he said. “If they are given the opportunity to step foot on the field again this year, I believe they will be prepared and passionately embrace the opportunity to finish what they have started.”