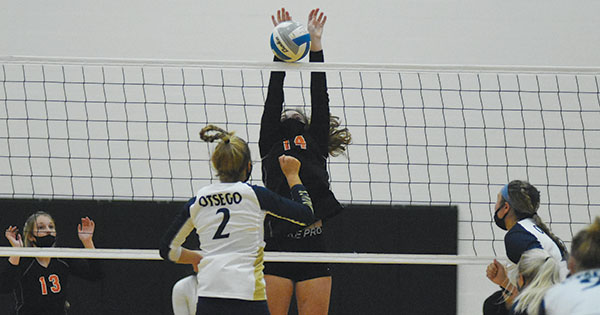 NILES — Despite having just seven players available for the Division 2 District volleyball opener at Niles High School Monday night, the Dowagiac volleyball team was able to advance to tonight’s semifinal against the host Vikings with a win over Lakeshore.

In the second quarterfinal game, Edwardsburg cruised to a 3-0 win over Buchanan to move into the semifinals against Berrien Springs tonight.

The 2020 season has been a battle for the Dowagiac volleyball team with injuries and COVID-19 related issues. Monday night was no exception.

While the Chieftains got a pair of key players back into their lineup, veteran coach Tony Hooley still had plenty of shuffling to do before his team hit the court against the Lancers.

“I couldn’t be more proud of the girls tonight,” Hooley said. “They overcame a lot of diversity to pull out this win. We needed every last one of them too. If even one had a bad match we don’t win. We have seven players in quarantine, including three just hours before the match. I learned about the last one while driving to the school.”

Already a young team with only three seniors on the roster, Hooley needed to add another underclassman for the Chieftains to have enough players to compete Monday night.

“Two of our players are freshmen with one, Aubry Busby, being pulled up from JV and seeing her very first varsity action,” he said. “She played amazing as did the other frosh, Abbey Dobberstein, who turned in her best performance of the season by far with seven kills and eight blocks. Abbey and Emma Allen led the way to our best blocking effort this season and one of the better offensive outings from the middle.”

The remaining players were veterans, but have missed multiple matches for a variety of issues. All four played key roles in Dowagiac advancing to the semifinals.

Edwardsburg was dominant up front with Sophie Overmyer, Lacey Laubach and Paige Miller combining for 29 kills. Liz Pederson had four blocks for the Eddies, who also got two blocks from Miller.

Defensively, the Eddies got Brooklyn Broadway back into the lineup in Mid-October after she missed more than half the season with an injury sustained in an accident. Her return had strengthened the Edwardsburg defense. Against the Bucks, she finished with a team-high 14 digs. Overmyer had 10 digs. Emma Strefling finished the night with 36 assists.

The Bucks also got a player back for the postseason in middle hitter Faith Carson. Carson had seven kills and six block assists as Buchanan bows out of the tournament with a 12-4 overall record.

Tonight, the Eddies and Shamrocks will kick off the semifinals at 5 p.m. Niles and Dowagiac will wrap the evening with the second semifinal, slated to begin at 6:30 p.m. The winners advance to Thursday’s district championship match at 6 p.m. at Niles High School.

WATERVLIET — A lack of court time did not seem to hurt the Brandywine volleyball team in its sweep of... read more