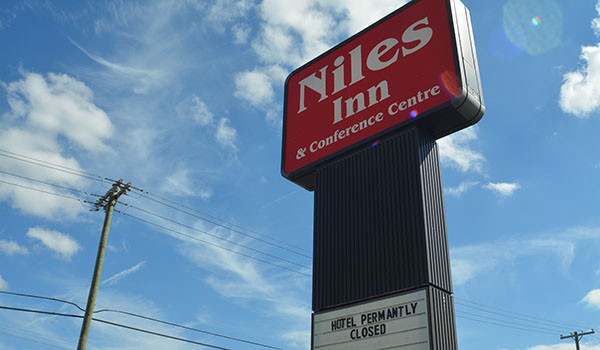 Niles Inn to be demolished in 2021

NILES—On Friday afternoon, Niles Mayor Nick Shelton announced on social media the owner of the Niles Inn and Conference Center, at 930 S. 11th St., had reached a tentative agreement with the city of Niles for demolition of the site in mid-2021.
“We have been working on this for years, but it looks like the plan will finally come to fruition,” Shelton said on the Facebook post.
He thanked City Administrator Ric Huff and his staff for the work on the deal.
The Niles Inn and Conference Center closed in September 2016 after owner George Jappaya decided to do so, in lieu of making corrections to maintenance issues found in the facility. The property originally had 85 rooms and a swimming pool.
According to Shelton, the property remains in private ownership. The owners have not indicated their intent.
“The agreement with the city is simply to mitigate the blight by demolishing an obsolete building,” Shelton said.

NILES — The Niles Trial Court operations are temporarily suspended through Nov. 9. Court officials said they are complying with the... read more