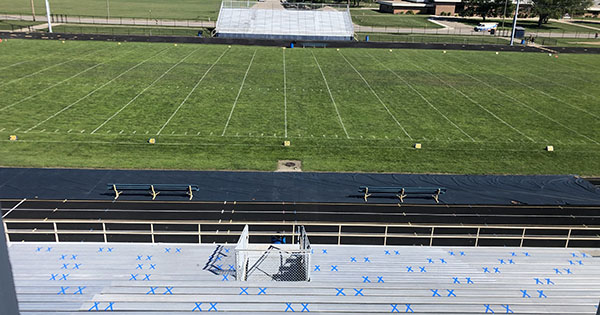 The Niles football stadium is ready to host the Black & Blue Rivalry for the first time since 2005. (Photo courtesy Niles Athletic Department)

(In celebration of the Black & Blue Rivalry game this week, Leader Publications is revisiting past coverage of the fierce competition between Dowagiac and Niles football. This column was written by former Niles Daily Star sports editor Erika Pickles in 2005.)

Niles fans of all ages shed a tear Tuesday. They shed a tear because the team they love to hate is leaving them. Come the 2006-07 academic year, the Niles-Dowagiac rivalry will be no more, for the Chieftains are leaving the Big 16.
In a unanimous vote Tuesday morning, the Wolverine Conference’s Board of Governors accepted Dowagiac into their league in all sports. No official date has been set for the Chieftains to begin play in the conference, but the 2006-07 season has been targeted.
Dowagiac made the move to get out of the SMAC and escape the dominant powerhouses that seem to hog conference honors every year. The Chieftains move to a conference with nine schools similar in enrollment and athletic ability.
While Niles supporters can’t blame Dowagiac for wanting a chance to be more competitive, it breaks their hearts to see the Chieftains go. Not only is Dowagiac the closest rival geographically for the Vikings, but the athletes are intertwined in so many ways.
With the communities being so close, the players know and are often good friends with the members on the other sidelines. Parents from the schools often work together. Both towns look forward to the matchup of rivals, no matter what sport, every season.
But nowhere will the loss be feel greater than in football. Chieftains versus Vikings on any playing surface is a heated contest, but pit those teams against each other on the football field, and it’s an all-out war.
Niles’ football team squared off against Dowagiac for the 101st time in history this past season. Only four other rivalries in the state of Michigan have lasted longer.
Not only do the players look forward to the match up, but so do coaches and the entire communities. For many in both towns, it’s a chance to relive the battles they fought as athletes at one of the schools.
And that’s the truth. More weight and more emphasis is placed on the Dowagiac game than any other the Vikings play. Niles may have finished the 2004 season 3-6, but they’ll always look back and remember the 39-0 thrashing they put on the Chieftains.
But, in two years, all that will be in the past. The Wolverine Conference is a 10-team league, so the Chieftains won’t have any room on their football schedule for non-conference games. Thus, next year may be Niles’ last crack at them on the football field.
In the long run, the move will prove beneficial for Dowagiac. But, it’s still sad to see one of the longest-running battles in football come to an end. Chieftains, we’ll miss you.

Erika Pickles is a former Niles Daily Star sports editor. She wrote this column in 2005.