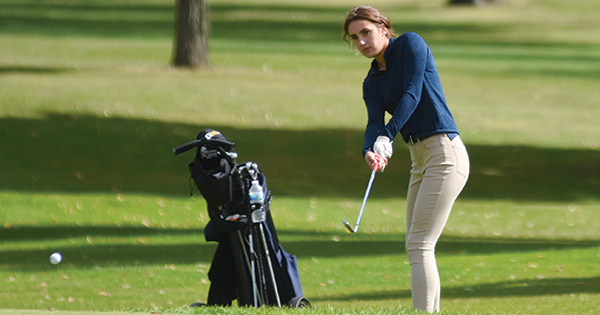 The Fighting Irish shot 379 as a team compared to 410 by runner-up South Haven. Kalamazoo Christian finished third with a 417, and Schoolcraft fourth with a 422. Niles finished fifth after shooting 424. Comstock was sixth with a 446.

South Haven’s Sydney Barnes earned medalist honors after shooting an 18-hole total of 89. Colleen McNally, of Kalamazoo Christian, was second with a 91. Meg Christian shot 92 for the Fighting Irish.

“Alexis had her best showing today posting a 103,” Brawley said. “She has worked hard all year and her scores have dropped each week. Freshman Baylee Davis also played well today posting a 107. We still need to shave three or four shots a side per player to be competitive at regionals.”

Veteran Niles coach said that his team had to adjust to playing the longer holes at Hampshire, and greens that were slower than their home course at Orchard Hills Country Club.

“I thought we got off the tee pretty good,” Brawley said. “I know Maddie Lister shot 104, which is right around her average. But I think they are going to be a little higher than normal.”

Part of the reason why the greens were slower at Hampshire is the amount of rain the course received overnight.

Water could be seen splashing into the air as balls hit the greens.

But in the end, everyone still had to play the same course. Brawley also noted that this was a good way to prepare for the upcoming regional.

“We have not gone up to Marshall yet,” he said. “I remember taking the boys up there one year and it is a lot more like this than Orchard Hills. So, this could be helpful for us.”

NILES — The Edwardsburg soccer team has struggled to score goals all season. The Eddies scored two in its season... read more