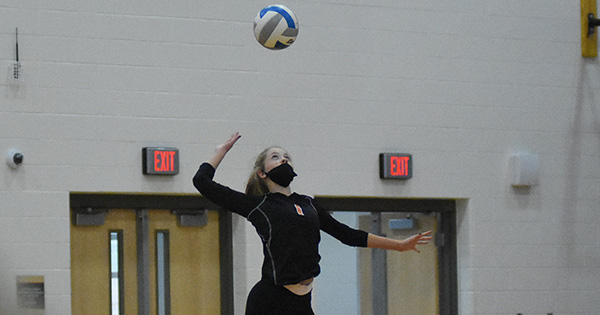 DOWAGIAC — After spending some time in the gym practicing since its season opener, the Dowagiac varsity volleyball team put forth a better effort in its home opener Tuesday night.

“The play was much better tonight,” said Dowagiac coach Tony Hooley. “There might have been a few bad stretches, but someone would always step up and make a good play to stop the bleeding before it put us in a hole too deep to get out of.”

Defense was the name of the game for the Chieftains, who needed to figure out how to stop Allegan’s Olivia Ott, who Hooley calls an all-state caliber hitter.

Dowagiac may not have blocked as well Hooley would have liked, but the serve-receive of Allie Conner, Megan Davis and Caleigh Wimberley drew his attention.

“It was another solid performance in serve-receive,” he said. “Allie owns that back row and has developed into a great leader.”

The Chieftains were able to get the offense going against Allegan. Davis led the way with six kills, while Riley Stack and Wimberley both had five.

“We finally saw our offense start to click with our pin players Megan, Caleigh and Riley Stack,” Hooley said. “Once we get our middles swinging more efficiently, we will be tough to beat.”

Serving was another key for the Chieftains. Jessie Hulett served up 12 straight points to rally Dowagiac in the third set.

“Finally, we served much better as a team with Riley and Jessie scoring a lot of points from the service line when we needed it,” Hooley said. “Megan and Jessie served 36 times with only a single error between them. Several others finished the night without committing a service error.”

The Chieftains are back on the court tonight as they travel to Paw Paw for another Wolverine Conference match.

ST. JOSEPH — Early detection of life-threatening heart disorders, stroke, and other diseases is possible through use of vascular testing... read more