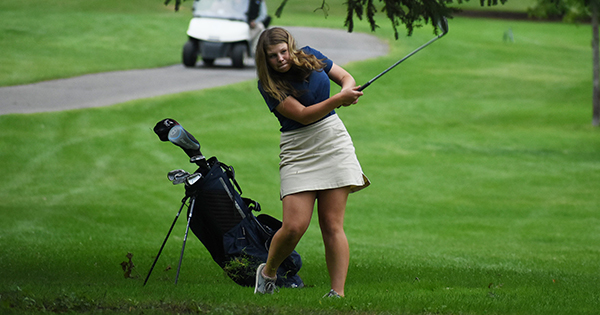 Niles’ Maddy Brook hits a shot during the KVA Jamboree hosted by the Vikings at Orchard Hills on Tuesday. (Leader photo/SCOTT NOVAK)

The Fighting Irish shot 194 as a team to easily outdistance runner-up Kalamazoo Christian, which finished with a 202. South Haven also shot 202, but finished third based on fifth-person scoring. Schoolcraft was fourth with a 215 and the host Vikings fifth with a 234.

Niles was led by Maddie Lister’s 57. Maddie Fuller and Zoe Limberopoulos both finished with a 58.

Niles coach Dan Brawley was pleased with the effort of his squad.

“It seems like there has been a silver lining in each match we’ve played,” he said. “As a team, we continue to improve. We shaved quite a few shots off of our previous matches. Zoe Limberopoulos played well today and shot one of her best scores during her varsity debut.”

The Vikings were back on the course Wednesday in a non-conference match with host Edwardsburg at Four Lakes Country Club. Niles will wrap up a busy — but short — week by playing in the KVA Jamboree hosted by Schoolcraft at State Golf Course in Vicksburg on Friday.