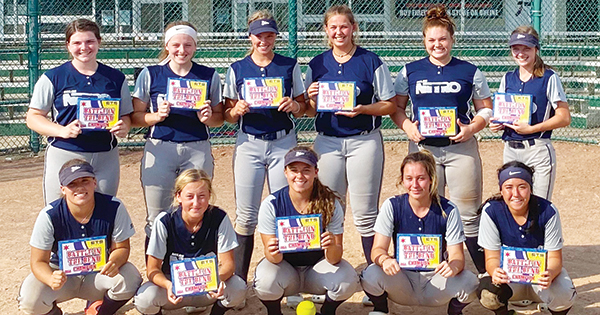 The Niles Nitro 16U travel softball team went undefeated in winning the Battle of the Bend last weekend. (Submitted photo)

Niles Nitro 16U wins Battle of the Bend

SOUTH BEND — The Niles Nitro 16U travel softball team went 6-0 to win the Battle of the Bend Tournament in South Bend last weekend.

Niles scored all of its runs in two innings of the title game. The Nitro scored five times in the opening inning and then exploded to seven runs in the third to end the game by the mercy rule.

Niles scored 12 runs on seven hits, including two each by Sophia Lozmack and Kaylee Shuler. Shuler, who tripled, drove in three runs. Olivia Elliott and Kaitlyn Klopenstine, who doubled, drove in two runs each.

Lozmack pitched all three innings to record the shutout. She allowed just two hits and struck out three.

In the semifinals, the Nitro broke the game open with a five-run third inning, which turned a 4-2 lead into a rout.

Niles had eight hits, including two each by Hailey Robinson and Sierra Carpenter. Both also drove in two runs. Robinson also had a triple.

Gabriella Kovac and Lozmack both had doubles, while Robins added a triple.

Elliott went the distance in the circle, allowing no earned runs on four hits with three strikeouts.

In the other games, Taylor Young, Elliott and Klopenstine all doubled. Robinson had a pair of doubles.