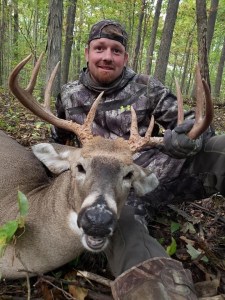 Richard was born March 28, 1986, at home, in Dowagiac. He is the son of Richard “Dick” Bruens Sr. and Cheri Ann Wallace (Wheetley)

He married Kimberly Miller-Gambrell in June 2018.

Richard was hard-working and infatuated with concrete. Prompting him to start and run a successful concrete business, Bruens concrete in Dayton, Ohio.

He loved the outdoors, hunting and tracking Whitetail bucks. Nothing could keep him from being in the woods. Even as a young boy, Richard or fry-guy as his family called him was always exploring, catching some wild animal, taking advantage of being outdoors

Richard loved being around his friends and family. His personality made it easy to be drawn towards him. He had the biggest laugh you have ever heard, just hearing it made you want to laugh right along. Not only did his personality light up a room, he could make you feel better with one of his well-known hugs. Richard showed the love and happiness in his heart to everyone that he met. If you ever needed something, Richard was the one to call. He was willing to give the shirt off his back for you.

He will be missed most by his many nieces and nephews. Uncle Richard was always their favorite and always knew how to keep things interesting.

Those wishing to pay respects to the family are invited to a celebration of life service at 2 p.m. on Sunday June 21, 2020, at his childhood church, Lawrence United Methodist Church, 122 S. Exchange St. Lawrence, MI 49064.