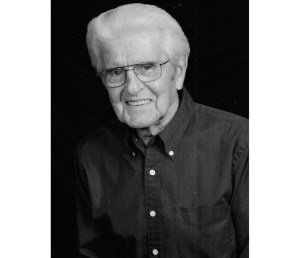 After graduation from high school DeVerl served proudly in the U.S. Army during WWII where he served under the command of General Patton in France and Germany and was awarded a bronze star. Upon returning home, DeVerl worked as a pipe fitter with the Local #172 until his retirement.

DeVerl was a devoted family man. He coached his sons in little league, took great pride in his yard, and when time permitted enjoyed hunting.

He is preceded in passing by his parents; his son, Major Blair Weller; his nine siblings; two sons-in-laws, Carl VanDyck and Richard Corser; and several nieces and nephews.

He is survived by his wife of almost 70 years, Anita Weller, of Niles; his son, Dr. Blaine (Laura) Weller, of North Muskegon; his daughter, Brenda VanDyck-Corser, of Jackson; and daughter-in-law, Susan Weller, of Fishers, Indiana. He is also survived by his three grandchildren, Matthew (April) Weller, Monica (Drew) Bordner and Erik (Lindsey) VanDyck; six great-grandchildren; and his sister, Mildred Lottridge, of Niles.

Those wishing to make a memorial donation in honor of DeVerl have been asked to consider St. Mark Catholic Church, 3 N. 19th St., Niles, MI 49120.

Due to the recent COVID-19 pandemic the Weller family will remember DeVerl privately and will miss his steadfastness and dedication to them.

Arrangements have been entrusted to Brown Funeral Home & Cremation Services, in Niles.