Richard Colby, 77, of Kalamazoo, passed away May 24, 2020, after battling pancreatic cancer for one and a half years.

He was born in Chicago to the late Leonard L. and the late Mildred Berman Colby (nee Cohen). The family moved to Kalamazoo when Richard was five years of age.

He graduated from University High School and attended Michigan State University on a tennis scholarship. 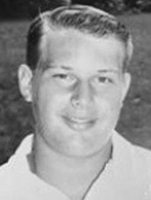 He graduated from Western Michigan University and his first employment was for the Portage Harold newspaper, which was founded by his father. He also wrote for the Jackson Citizen Patriot and the Battle Creek Enquirer News.

He moved to Detroit in 1971 to become Director Public Information for the Michigan Civil Rights Commission, but in 1973 returned to western Michigan to sell insurance, an endeavor for which he won many awards.

He was preceded in death by his only child, Jeffrey Louis Colby, who passed away in 2007. He is survived by his sister, Karen Colby (Jerry) Weiner; her three children, Joel (Marcella) Weiner, Doren Weinstein and AJ (Kara) Weiner; a great-niece; six great-nephews; and loving cousins.

He is also survived by his former wife, Peggy DeBoer Colby, a devoted caregiver both before and during his final illness.