Barbara H. Shreve, 94, formerly of Buchanan, passed away, Saturday, May 23, 2020, at West Woods, of Niles, where she most recently resided.

A private visitation and burial has taken place.

In lieu of flowers, donations in Barbara’s name may be made to First Presbyterian Church, Buchanan. Those wishing to sign Barbara’s Memory Book online may do so at swemchapel.com.

Barbara was born Oct. 22, 1925, in South Bend, to Ernest and Ruth (Broadhurst) Hausman. She graduated from Buchanan High School, Class of 1943. 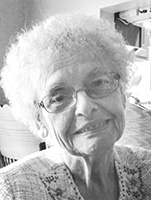 She was a trained soprano and a choir member for more than 70 years, directed both the adult and youth choir, served as an elder and the treasurer for a number of years and was part of the Ruth Circle Club, the 30 Club, The Book Club, BYKOTA Club where she enjoyed the traveling that they did, and the Buchanan Order of Eastern Star.

When her daughters were growing up, Barbara served as a Brownie leader for their troops. Thanks to Barbara and all that she provided, the Shreve home was the neighborhood gathering place for all of the girls’ friends.

In her free time, Barbara enjoyed board games and jig saw puzzles with the grandchildren, traveling and shopping and finding that Black Friday special deal.

She was preceded in death by her husband, Roland on March 22, 2007; and by her siblings, Jean May, James and John Hausman.