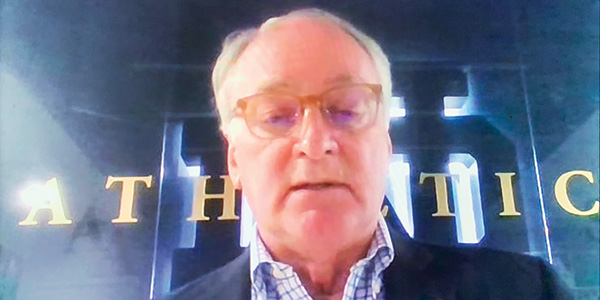 NOTRE DAME, Ind. — As of Tuesday afternoon, the Notre Dame game against Navy in Dublin, Ireland is still on according to Fighting Irish athletic director Jack Swarbrick, who met with the media via Zoom.

But if you ask Swarbrick that same question tomorrow, or over the next month or so, you might get a different answer.

“At this point, it’s still on the schedule, and as [Navy Director of Athletics Chet [Gladchuk] mentioned, our focus — in part because there’s no reason to have a different focus — is on moving forward toward it,” he said. “We get more information every day. We get more information from Ireland. We get a better sense of the state of college football generally and whether it can begin on time. But until so many of the blanks are filled in, we’re not at a point yet to do anything other than plan for it.”

That was one of the many topics on the minds of reporters, who were concerned about other things, such as what happens if conferences are forced to skip non-league contests.

Swarbrick was not concerned that independent Notre Dame would be on the outside looking in.

“I don’t want to speak for the conference commissioners, but I think they’re considering every option, and I would be surprised if there’s any conference that hasn’t looked at a conference-only alternative,” he said. “We are very comfortable that if it goes that way that we’ll be fine, that we’ll be able to play a high-quality full schedule, the same number of games other teams will play.”

Swarbrick also pointed out that there could be changes to the current 2020 Fighting Irish schedule, but he felt that in conversations he has had, Notre Dame would not be forced out.

“My hope — and one of the things I’ve encouraged in my conversations — is whether a possible model is a conference schedule plus-one,” he said. “There are so many great plus-one games, traditional rivalries that occur among schools. There are great rivalries in the state of Florida, for example, or Clemson-South Carolina. So you protect those, and other than that one game, you build your schedule around conferences.”

Currently, Notre Dame is scheduled to play Wake Forrest in Charlotte, North Carolina, Wisconsin at Lambeau Field in Green Bay, Wisconsin, at Pittsburgh, Georgia Tech in Atlanta and USC in Los Angeles. Swarbrick is positive that each of those opponents would like to keep their game on the schedule, just like Navy does, whether it plays in Dublin or not.

The Wisconsin and USC games would draw not only a sellout at the stadiums, but a huge national television audience.

“We would love Wisconsin to be able to still play Notre Dame in Lambeau (Field) this year, or for Arkansas to still visit (Notre Dame),” Swarbrick said. “We’ll see how that evolves, but I’m not concerned about our ability to have a challenging, robust schedule, even if the conferences goes to a conference-only model.”

Other topics included how Notre Dame is handling the coronovirus outbreak, when athletes might be able to return to campus to start preseason training, and the NCAA looking more and more like it would allow student-athletes to be paid for the use of their likeness on merchandise.

Read about those tops in Saturday’s newspaper.

Locals band together to assemble masks for Dowagiac businesses

DOWAGIAC — Area residents are lending a hand — and their sewing machines — to help businesses fight the COVID-19... read more