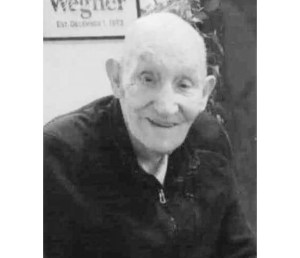 Robert “Bob” Bruce Barton, 95, of Dowagiac, passed away peacefully at home on Saturday, March 11, 2020, surrounded by loved ones.

Bob was born in Dowagiac, on July 5, 1924, to the late Carlton and Gertrude (Barney) Barton.

He graduated from Dowagiac Union High School in 1942, where he earned the first All Sports Award. He attended Western Michigan University.

His education was interrupted when he was drafted into the U.S. Army, during World War II. Bob heroically served out country from 1943 to 1946 in Normandy, Northern France and Central Europe, where he was a Purple Heart recipient. He returned to Dowagiac in 1946, where he took an interest in woodworking, many people in the community own a piece of Bob’s custom woodwork.

Bob was a lifetime Dowagiac Daily News reader. He continued his selfless sacrifice throughout his adult life volunteering in his hometown.

Bob was an active member of the Dowagiac Moose Lodge 933, where he was still playing in the Pitch Card League. He received the Presidential Silvia Volunteer award from the COA, Cass County Council on Aging and has volunteered thousands of hours serving the community through the COA.

Bob was a true Chieftain, attending every home football game for more than 60 years.

His hobbies include bow and arrow hunting, throwing darts, building rockets, horseshoes and exercising. Bob would always win the costume contest at Halloween, he looked forward to handing out candy, to the community youngsters, during trick or treat.

Bob was laid to rest in Veterans Row, at Riverside Cemetery in Dowagiac, on Wednesday, April 15, 2020, with a private graveside service.

Memorial contributions in his memory may be directed to the Cass County Council on Aging.