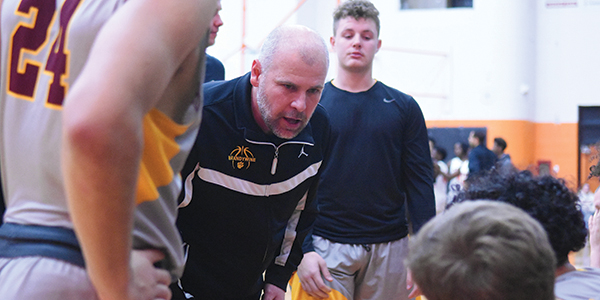 BERRIEN SPRINGS — It was not easy, but visiting Brandywine claimed at least a share of the BCS Athletic Conference Red Division championship with a 68-63 win over Berrien Springs in double overtime Thursday.

The two teams were deadlocked at 48-48 after regulation and 55-55 after the first overtime.

Kendall Chrismon scored a game-high 21 points to lead the Bobcats, who also got 18 points from Jordan Abrams and eight points from Shane Brown.

Brandywine will bow focus on Wednesday’s district against Watervliet at 6 p.m. at Bridgman.

The Chieftains will head into the postseason Monday with a 14-6 record and a full head of steam as they finished the regular season winning five of its final six games, including back-to-back wins.

Veteran Dowagiac coach Danum Hunt was hoping his team would gain some momentum with its win over Paw Paw and South Haven, and that is exactly what the Chieftains did.

“Those are the kind of games we need preparing for the tournament,” he said. “Hopefully, we can build off of that going into this game.”

Dowagiac led 17-11 after one quarter before exploding for 21 points in the second quarter, which allowed the Chieftains to open up a 38-26 lead. It was never seriously challenged by the Rams after that.

The Chieftains now shift their focus to the postseason and Monday’s Division 2 district opener against host Edwardsburg.

Dowagiac and the Eddies, who were defeated by Otsego (81-55) in the Wolverine Conference championship game Thursday night, split their South Division games. Edwardsburg, the South champions, lost 61-46 at Dowagiac, but knocked off the Chieftains 51-45 at home.

In the second meeting, the Eddies were able to control the tempo of the game. Dowagiac struggled to shoot the basketball as well.

“Energy and tempo are keys next week,” he said. “We have to establish the tempo and play Dowagiac basketball. We need to press at both ends of the floor and get out and run.”

Tipoff for the district opener is 6 p.m. Tickets are $6 per person, and no passes will be accepted.

Visiting Edwardsburg got off to a slow start and was never able to recover as Otsego won its third consecutive Wolverine Conference boys basketball championship.

Zach Strycker finished with 12 points to lead the Eddies, who also got eight points from Max Hafner and Luke Stowasser.

T.J. Reed is a senior on the Dowagiac boys basketball team. What has been one of your greatest accomplishments as... read more