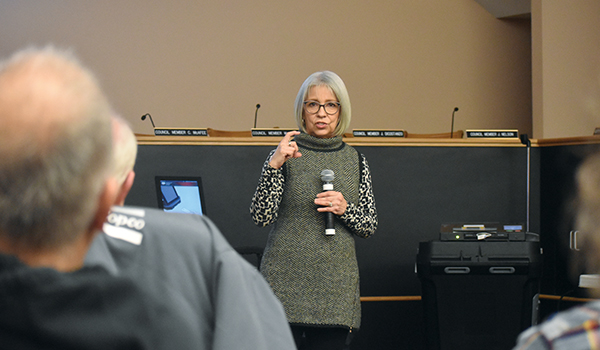 When voters line up at their precinct locations March 10 for the presidential primary election, they will be met by some of about 30 trained volunteers, four precinct chairs and twice-tested voting equipment.

Casperson believes her scenario will be much different than the Feb. 3 Iowa caucus for presidential primary candidates.

While the caucus suffered from app troubles, phone line backups and hand counts, Casperson and her crew will rely on tested equipment and backup measures.

While some Iowa caucus volunteers struggled to download an app meant to deliver precinct results, Casperson prepared a volunteer crew with a rundown of working an election, including issues that could arise.

While some fear that election interference from foreign nations will skew votes, Casperson and her team will go through various levels of ballot approval at the local and county level.

“We do a preliminary [test]. We do a public [test],” she said about the city’s voting equipment. “I have people in place. We have all of our checks and balances. I am confident with our system.”

That system may see an increased burden compared to past presidential primaries.

“I hope that this election will bring out some more voters, and I anticipate that they will,” Casperson said.

The city clerk estimated that 17 to 18 percent of citizens 18 and older came out to vote in past presidential primaries.

To prepare for the potential voter increase and accompanying issues, Casperson brought about 30 volunteers last Thursday evening to the Niles Fire Department complex, 1345 E. Main St., to learn about the all-day affair working at the polls.

After giving a lecture on all the roles volunteers could have and the scenarios they could encounter, she had all members participate either as voters or as election volunteers in a mock election.

Julius Vinall, 17, was one of the students. He said he and the three other students decided to volunteer after Casperson and others gave a presentation about the opportunity to New Tech students.

Vinall will not be able to vote during the presidential primaries because of his age, but he plans to help others instead.

“I thought I might as well get the experience of it,” he said.

At the mock election, Vinall and others processed mock voters’ identification and signatures with electronic polls, which provide a live look at all voters registered in Niles city limits.

If a mock voter was not registered in their precinct, they directed them to the correct location to vote. If a mock voter recently moved to Niles and was registered to vote, the New Tech students asked them for proof of residency, such as a utility bill or a lease agreement.

After New Tech students gave the mock voters a ballot number, the voters went to vote. Once they finished, they processed their ballot in a tabulator, which Vinall manned for most of the session.

If the ballot was filled incorrectly — such as having two candidates filled in for an election where only one could be chosen — Vinall gave the voter two choices. That person could either receive a new ballot number and vote again or they could submit the ballot and have their errors not be counted as votes.

The New Tech students had the chairman by their side and numerous backup measures in place, such as an electronic poll booth.

The session was a replica of what would and could happen on March 10, Casperson said.

During the actual election, the city clerk’s office would work to ensure there were no troubles city-wide, and Casperson’s assistant, Amanda Barnett, would check and count all absentee ballots.

When the polls would close at 8 p.m., Casperson and the precinct chairs would double-check all systems, poll booths, seals and ballots. Then, Casperson would deliver the necessary information to the county clerk, who would check the information again.

Casperson said the day is rewarding but tiring for those who work it. To help things run smoothly and correctly, she provided the following advice to voters: stay educated on the voting process.

Prospective voters can find out how an election works and who is on the March 10 ballot by visiting michigan.gov/sos.

After the March 10 election, the Aug. 4 state and local primary, and the Nov. 3 general election will follow.