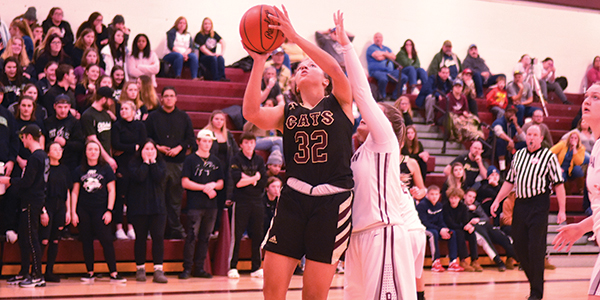 Brandywine seniors get the message

It was a chance for the Bobcats to make a statement that they intend to reclaim the division championship. The statement was loud and clear as No. 10-ranked Brandywine routed Buchanan 45-17.

Veteran Brandywine girls basketball coach Josh Hood has been reminding his senior class that they have not won a division championship. He said if they wanted to check that box on their  resume, they better get the job done against the Bucks, who were rated No. 3 in Division 2 the previous week before falling to Niles.

“We really just wanted to leave it all out there,” Byrd said. “They had nothing to lose, and we had to prove ourselves.”

One of the keys, according to Byrd, was keeping the Bucks’ 6-foot-2 center away from the basket.

“We needed more movement to isolate [Faith] Carson out on the perimeter so we could get more threes and attack. We really focused on keeping her off the blocks on the offensive end.”

Hood gave his team all the motivation it needed in the days leading up to the showdown.

“Our girls came out with an attitude,” Hood said. “There’s been a lot of chatter about passing the reins off (to Buchanan), and I think our girls took that to heart a bit. Practices have not been great, but tonight we played like a team that was in the state quarterfinals last season.”

Both teams had issues getting into any offensive rhythm in the first quarter as defense was the name of the game. That changed in the second quarter as the Bobcats started to find their form.

Leading 9-5 after eight minutes of play, Brandywine outscored Buchanan 13-4 in the second quarter to open up a 22-9 halftime advantage. It was just a preview of things to come.

“They’re an experienced team, and it showed,” Buchanan coach Gabe Miller said. “There were things we did ok on, but I think once we got into the halfcourt, their halfcourt trap gave us problems. We played a little fast; they did a good job of taking Faith out of the lane. Those are things we have to work on, and we’re looking forward to taking what we learned from this game and using it to improve.”

Senior Zakiyyah Abdullah and sister Malikiyyah Abdullah, a junior, led the offensive charge by combining for 28 of the Bobcats’ 45 points. Brandywine also got nine points from senior Byrd.

After hitting two quick threes in the opening quarter, Brandywine hit a lull offensively, and despite taking a 22-9 lead into halftime, Abdullah said their work was not done.

Abdullah says she enjoys it when her team can spread out the floor on offense, which gives her the opportunity to drive to the basket or pull up for a jump shot.

“It is helpful for me because I have multiple options,” she said.

The Bobcats return to the court Tuesday when they host New Buffalo (8-1) in a BCS non-divisional contest.

Byrd said the win gets the team ready for the remainder of the season.

“This win gives us to the confidence that we are a good team, but we are not done yet,” she said. “We have a lot to improve.”